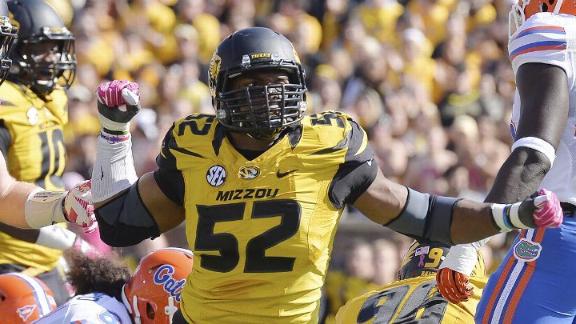 Understandably, there’s only two types of football Americans tend to care about, the NFL and College Football. The common fan just doesn’t care about other leagues such as the Canadian Football League, or CFL for short. However, Missouri fans should start caring, as the University of Missouri is slowly becoming an international pipe-line to the league of neighbors up north.

While Franklin, Josey, and Sam are all brand new to the league, Lawrence and Simmons have already made an impression in the league. Simmons has been in the league since 2012. In 2012 and 2013, Simmons played for the Toronto Argonauts, never amassing more than 4 tackles, but grabbing an interception both years. Simmons had his real coming-out party in 2014 for the expansion Ottawa Redblacks. In Ottawa’s first season, Simmons led the team with 80 tackles, 11 more than Antoine Pruneau, the team’s second leading tackler. Simmons also grabbed 3 interceptions for 61 yards.

On the other side of the ball, Lawrence enters his second season in the CFL. The Eskimos back was third on the team in rushing yards in 2014 with 413. He carried the ball 65 times 9average of 6.4 yards per carry) and scored one touchdown on the ground. It was through the pass and on returns that Lawrence made his presence known. Lawrence led all running backs on the Eskimos in receptions (41) and yards (437) both of which were the fourth most on the team, he also caught two touchdowns. His returning game was an impact as well. Lawrence had 17 kick returns for 493 yards and a pair of touchdowns, including a 107 yard return, and despite not returning a punt for a touchdown, Lawrence had 49 return for 447 yards.

Pre-Season begins in a little over a week for the CFL. For Josey and Sam, it will be the first time since we saw either of them take the field since Week 4 of the NFL Pre-Season last year. For Franklin, it will be the first time we’ll see him play since the 2014 Cotton Bowl, and for Simmons and Lawrence, they’ll remember the black uniforms they wore for four years, they’ll remember their roots as they take the field with our neighbors up north.

(NOTE: Former Missouri punter Trey Barrow was signed by the Redblacks early May and was headed to Canada for training camp, but is not listed on the Redblacks roster on the team’s official site, nor is he listed on a roster by the CFL’s official stie)

BONUS: Henry Josey is already making a great impression on his new team: