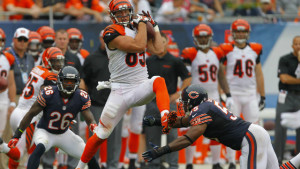 Jermaine Gresham is a Free Agent in 2015. Tyler Eifert got hurt before his 2014 season could gain any traction. The Bengals have been non commital to Gresham’s return and Eifert figures to be a big part of the teams plans whether Gresham returns or not. The Fort Wayne native is incredibly talented and figures to get alot of work out of the slot this year. If Gresham doesn’t return the Bengals will definetly need to address the tight end position adding another in-line blocker and pass catching tight end. Eifert is a poor blocker but a phenomenal athlete.

That’s all I have for you regarding the Bengals skill position players. Leave a comment below if you disagree with anything I had to say or just want to leave feedback of your own. Look out Monday for my thoughts on this weekend’s super bowl and for me to look at the men up front the Offensive Line. Until next time.