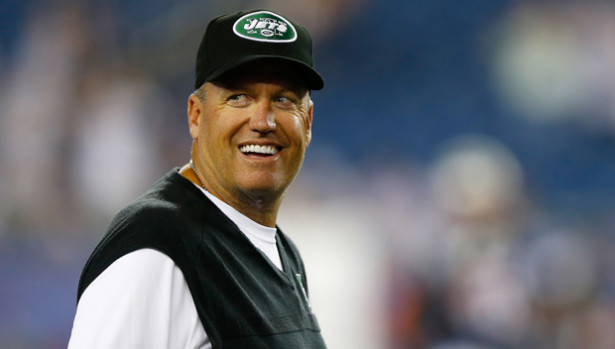 Did Rex Ryan go to the same team?

When Rex Ryan became the head coach of the New York Jets in 2009, they were a team looking to get over the hump with some new blood. The Jets were not a bad team in 2008, they finished 9-7 and were only one 4-12 season removed from a 10-6 wild card berth under Eric Mangini. Rex was supposed to come in and be the motivator and the defensive guru, and he did just that. The team moved on from the Brett Favre days, and took a young rookie quarterback by the name of Mark Sanchez in the first round. In Rex’s first two years he transformed Mangini’s defense, which had ranked 20th, 18th, and 16th in the league over his three years, to 1st and 3rd in the NFL raking his team to the AFC championship two years in a row. However, as the years went on in New York, Ryan’s team lost a few players and Mark Sanchez stopped moving forward in his development. Eventually the team stalled and Ryan was fired after not having won more than eight game in the past four years.

Now it is being reported by ESPN’s Adam Schefter, that Ryan is heading to the Buffalo Bills to help them overcome an unfortunate and unforeseen head coaching departure and also take them to a new level as a team. Ryan is a very good coach and will certainly help improve/keep the Bills defense one of the best in the league, but is this the right move for the Bills or for Ryan?

Here is a side by side comparison between the 2009 Jets that Ryan walked in to coach and the 2014 Bills team that Ryan will be going to coach, minus some pending free agency changes.

Rex Ryan was just recently the coach for a Jets team that was offensive deficient. After Mark Sanchez, the Jets tried, and are still trying, to find their way with second round pick Geno Smith. In Ryan’s time with the Jets he went through three offensive coordinators, two quarterbacks, and his offenses ranked 20th, 11th, 25th, 30th, 25th, and 22nd (from 2009-2014). The Bills are a team that is ready to win now, or at least want to make it to the playoffs now, and need a coach that can develop a young quarterback.

The Jets, it could easily be stated, had a much better team overall in 2009, and certainly a better offense that the Bills currently have. If the Bills are looking to move on with a lesser offense than the Jets team had in 2009, they will NEED to have another strong offensive hire in mind to achieve their goals, otherwise this could be a quick repeat of history.

For Rex Ryan, it feels like a step down. This team does not have a first round pick this year and has seemingly given up on their former first round investment at quarterback, E.J. Manuel. Just like the Jets, the Bills have a spectacularly talented defensive line, the linebackers are young and talented, but not as proven as the linebackers of the 2009 Jets, and the secondary is more complete, but does not have a potential hall of famer at any position. Ryan is going to have to work again with a team that has outstanding defensive talent and is lacking, once again, a steady offense.

Rex Ryan may have left the New York Jets, but he seemingly found a home with the exactly same team.

Nathan Piggush
Nathan is a senior studying Communications at Purdue University. He is an avid Baltimore Ravens fan and has been following the team since 2003. In his spare time he likes to write and stay up to date on all the goings on in the NFL. He’s previously worked in the Purdue Football scouting office and interned as a player participation analyst for Pro Football Focus, the advanced NFL statistics website.