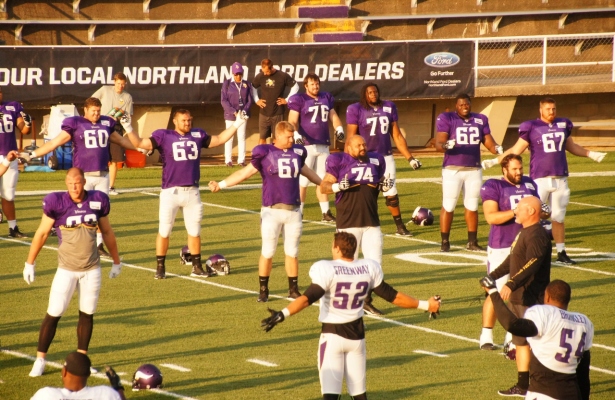 Minnesota is 1-8 all-time vs the Jets and has lost 7 in a row in this series. Minnesota is 1-3 at home while 0-5 in New York. The only win Minnesota has comes back in 1975 when the Bud Grant coached Vikings beats the Jets 29-21.  The 9 games played vs the Jets ranks 2nd amongst teams that have faced the Jets trailing only Baltimore.

The last time Minnesota faced the Jets was on Monday football when Brett Favre threw his 500th touchdown and it was a 37 yard pass to Randy Moss.

Minnesota vs NY Jets by the numbers

The Jets are ranked 2nd in the NFL in rushing

Everson Griffen now has 11 sacks which is 2nd in the NFC. He now has multiple sacks in 3 of the games this season.

Adam Thielen is the 4th Vikings player in team history to block a punt and return it for a touchdown.

Minnesota returned 2 blocked punts for touchdowns also has history to it. Everson Griffen’s 43 yard return is now the longest in team history. The 2nd now belongs to Adam Thielen with 30 and the 3rd ranked is Nate Allen back on 10/17/76 with a 29 yarder.

THOUGHTS ON THE GAME

The Jets have 2 wins for the year which can scare a fan except for one big advantage and I believe that falls on the feet of Mike Zimmer.

I believe the Jets will give the Vikings a heavy dose of Percy Harvin. The Jets also have a tremendous running game lead by Chris Johnson. The one big problem as of late with the Vikings has been the tackling. This will be a great test for the Vikngs defense.

I am of the belief that the Vikings will be ready for the Jets. The 2 wins by the Jets yet I know a Rex Ryan lead defense will test Teddy Bridgewater. I love what I saw out of Teddy last week keeping his composure and feel he will do the same this week. I don’t see big numbers vs the Jets as far as passing but I do feel Teddy will be efficient and take what is given.

Geno Smith will start for the Jets at QB and is young and athletic so the Vikes d-line will need to keep Smith in the pocket. I don’t believe the Jets will throw much rather rely on the running game.

I see the Vikings making this a statement game and will crush the Jets by the final of 31-3.

Bleeding Purple to the day I die

Todd Walkingstick
I am in my 14th year as a Vikings season ticket holder. I have gone to 21 straight years of Vikings Training Camp in Mankato. I have gone to road games in Denver (1999) St. Louis, Denver (1999), New Orleans (2010) and Green Bay (2012). I love the Purple, win or lose. I also love all Minnesota sports Pro or College Minnesota sports rock You can follow me at Purple_Stick