After Injuries Ravaged The Secondary Where Do The Jets Go Now? 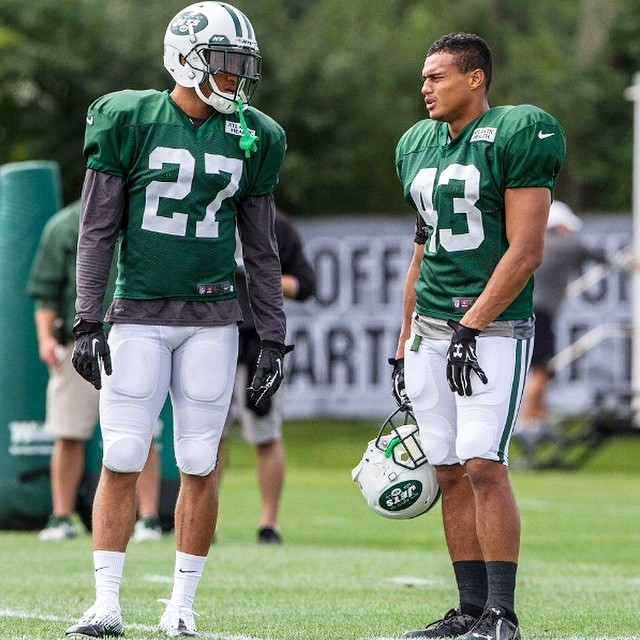 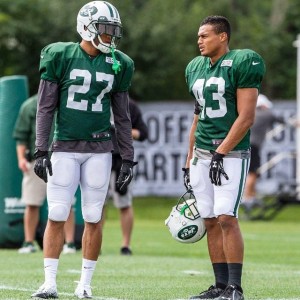 With Dee Milliner & Dexter McDougle on the shelf who will step up for the New York Jets?

With an already thin secondary to begin with the Jets now have to try to find some answers three weeks out from their regular season debut against the Oakland Raiders. The New York Jets 3rd round pick out of Maryland Dexter McDougle tore his ACL during Sunday’s practice session and if that wasn’t enough Dee Milliner suffered an ankle sprain that’ll keep him on the shelf for the next several weeks. New York Jet fans pride and expectations have taken quite a hit these last 48-72 hours as frustration mounts over the apparent lack of depth at the corner position. As Idzik swung and missed on several guys like Vontae Davis, Dominique Rodgers-Cromartie, and Alteraun Verner to name a few. We even considered bringing back he who must not be named Revis! But Idzik stuck to his guns and his bravado, “I don’t think immediate spending translates into winning. I think responsible spending translates into sustainable winning.” You can’t blame Idzik for being wavered by the opinions of others; something we’ve learned is that Idzik doesn’t make decisions hastily. He is meticulous in his ways, even to the point of defiance. As we saw in the drawn out free-agent courting of Rodgers-Cromartie, where they waited too long to act and he escaped out of our clutches to the New York Giants. As many fans have been questioning what the Jets plan to do to address the corner situation. The tandem of Rex-Idzik seem calm, cool, and completely un-fazed.

When Rex was questioned about the ‘dire’ situation Rex responded confidently, “I never said I had to have the best corner in football,” Ryan said Monday, one day after Dee Milliner suffered an ankle sprain, rookie Dexter McDougle tore his ACL, and Dimitri Patterson is battling through a quad injury.

“That’s not it. My defenses work, period. I don’t care what it is. We take what we have, and then we work around it. So we work to the strength of our players, and it’s always players over system. We’ve been around enough that it’ll work out.” Something that Rex Ryan has prided himself over the years, adjusting the defense to the players, not the other way around. A huge recruiting factor for the Jets these past several years, Rex’s reputation speaks for itself, defensive players especially want to come here because they know Rex will put them in the best position to succeed. For example, in Revis’s golden years was a defensive system set up that Revis was matched up against the opposite team’s #1 receiver every play and he was put over there on an island and took away an entire half of the field. Now his defensive system highlights his front 7 which is one of the top in the entire NFL. No matter who Rex has at his disposal he creates the defense that best fits the players. So losing a couple of corners may not be the tragic situation that some are making it out to be.

“That’s why, to me , it’s not a panic situation, it’s an opportunity… we’re not a one-trick pony thing. We’re not a team that tries to stick a square peg in a round hole. We’ll take what we have and we’ll make it work.” That same sentiment was applied to their practice on Monday, when the Jets utilized Safety Antonio Allen and threw him with the corners. The result? Allen had two interceptions in team drills. Antonio demonstrated the kind of man-man coverage that he is capable of, as he did last season picking off Tom Brady in a pivotal moment in the game helping to generate a Jets comeback with a defensive touchdown that sparked a Jets victory late last season.

Hearing the immediate positive results from the position switch to corner, has fans back on the ship creating the ‘I got this Rex Ryan Memes’. Re-iterating why Rex has this attitude of ‘don’t worry about it I have it under control’. Which goes perfectly hand in hand with the aforementioned Idzik’s next man up philosophy. 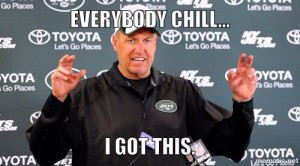 But even so the Jets need Dimitri & Dee to recover as quickly as possible as the Jets have the 9th toughest schedule in the entire league and face a devil’s gauntlet of quarterbacks to open the season including the likes of Aaron Rodgers, Jay Cutler, Matthew Stafford, Philip Rivers, Peyton Manning, and Tom Brady to name a few. In today’s NFL it’s a passing league the old moniker, ‘you can never have enough good corners’ will surely be tested as the Idzik philosophy of next man up will have to come to fruition. With guys like fan-favorite Darrin Walls, Kyle Wilson, and Patriot cast-off Ras-I Dowling will undoubtedly have to step up for the Jets to be able to contain these elite passing teams they’ll be facing this season. But perhaps there is a glimmer of hope in all this, as a die-hard New York Jets Fan, I believe in the Rex-Idzik regime, I believe in our team, they’ll be all right. We have a lot of young guys who’ll have their chance to shine and step up to the plate.