Last day of Jets Training Camp ends with a Splash! 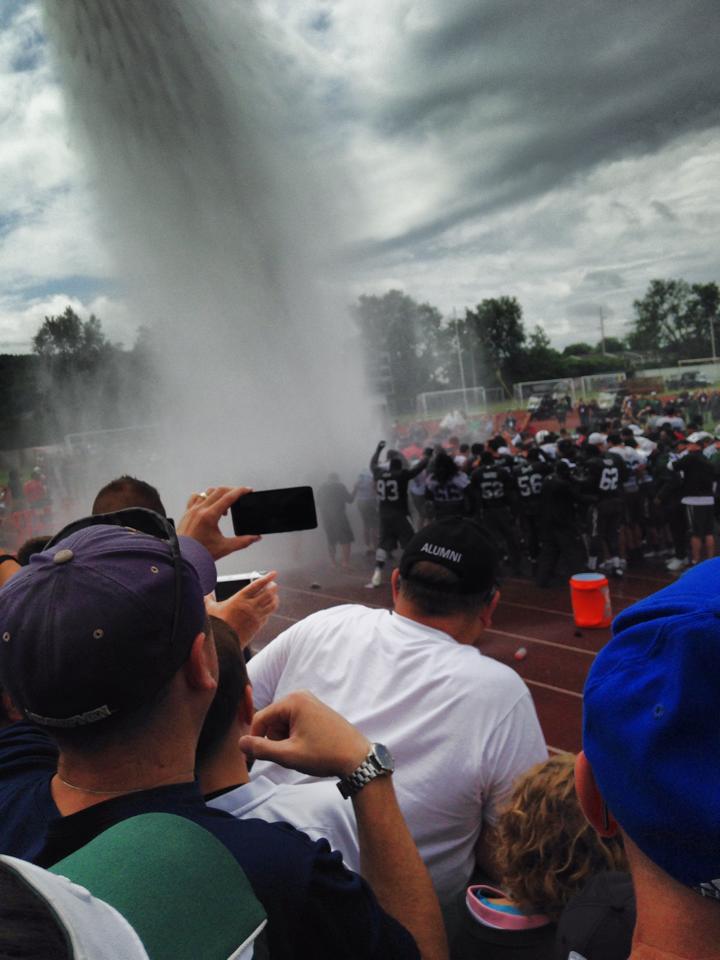 After three weeks of training camp, the New York Jets had a little bit of fun to end their last practice in Cortland. Accepting the challenge posed from the New England Patriots & Jimmy Fallon to partake in the ice bucket water challenge, to raise awareness for ALS. It was the perfect ending to a long three weeks in Cortland. Thanks to the participation of the Cortland Fire Department they doused the players with a crane-mounted fire hose. 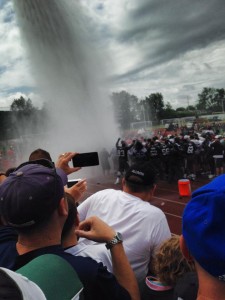 The last day was a light practice that consisted of windy and rainy weather as the New York Jets continue to prepare for the Cincinnati Bengals. It was another lack-luster practice for former 2nd round pick Stephen Hill who continues his Jekyll and Hyde performances. He had several drops and throughout training camp, much like his career thus far he has shown flashes of brilliance and then reverts to lack of concentration and dropping the pigskin. Because to be honest best case scenario he is the 4th best receiver on this ball club behind: Eric Decker, Jeremy Kerley and David Nelson. So far his career has been an utter disappointment not something the former Jets Brass had hoped when they traded up in the draft to select the Georgia Tech product. This is perhaps his last chance with the Jets and he has to try to make the most of it.

Something that has everyone up in arms these past couple weeks is the word ‘Wildcat’. Nightmares of the ‘Tebow’ experience plague many Jets fans minds. On Tuesday, Jets offensive coordinator Marty Mornhinweg fielded questions about the possibility of Vick as a ‘change of pace guy’. “That’s real, I think,” said Mornhinweg, who has utilized the Wildcat package in his previous stints with the Philadelphia Eagles & Detroit Lions. “There’s no question about that. However, I know this: It depends how you do it. So yeah, that part of it’s real, and I understand that. I suspect, looking forward, there will be times where you may see a little bit (of it). There may be times where you don’t see much of it. There’s an awful lot of positives (to the package). Mike is a unique player. He has unique abilities. So we’ll see.” But again to be honest here Tebow & Vick aren’t even in the same stratosphere, Vick is one of the most electric players to ever play the game. As we saw in the first preseason game he still has plenty of juice in his legs, scrambling three times for 19 yards, including a 15 yard scramble on an 80 yard drive. We’ve seen the ‘change of pace’ thing before. I remember when the Arizona Cardinals tried it with Leinart & Warner alternating series back and forth. I think that really stopped the flow of the game and hindered the quarterback play. And more recently the aforementioned ‘Tebow’ experience really messed up the chemistry of the team. But the Wildcat formations that I saw on the last day of practice really intrigued me, we saw a lot of Vick & Geno on the field at the same time. Marty is an offensive guru and the formation with Geno in the shotgun formation with Vick lined up behind him with run or pass responsibility looked really fluid. Seeing Bilal Powell taking the direct snap brought back fond memories of the ‘Seminole’ formation we used to run when Leon Washington was at the helm and it worked spectacularly.

Ultimately I believe there is a time and place for everything and I tend to trust Marty’s time and place a little more than Tony Sparano. But all the media attention around Rex & Marty flirting with the possibilities shouldn’t be getting bashed by guys like Donovan McNabb, Instead I think they should be praised. Because talk is cheap, once we get to the field then we’ll see how much of the Wildcat we actually see. But I think talking about is a good thing because that is one more thing the opponent has to prepare for, that is one more portion of their practice that they are using to stop something that may or may not even happen.

Now the Jets head back home to finish preparation for preseason game #2 vs. the Cincinnati Bengals on Saturday night.