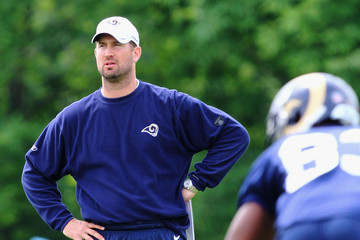 The St. Louis Rams have built themselves a nice little team. Which is a great thing for Rams fans, but what does that all mean if the Rams are forced to try to overcome their own offensive coordinator?

The St. Louis Rams came within a few yards of winning against the San Diego Chargers on Sunday. That was until Brian Schottenheimer decided to put the ball in the hands of a career back up QB instead of one of three running backs more than capable of handling the running duties and potentially pushing the ball into the endzone.

Running backs Tre Mason, Benny Cunningham, and Zac Stacy all could have carried the football for the final four yards the Rams needed to punch the ball into the endzone. Instead, we saw Shaun Hill throw an interception with time dwindling down.

It’s hard to fault Shaun Hill for the interception considering he is 34 years old and has never been named the starter of an NFL game without the original guy being hurt.

So why is this becoming such a hot topic? Why are fans trying to get “#fireshotty” trending on Twitter? Because this has got to be the final straw. Too many times Rams fans have seen this team lose due to poor play calling in important moments.

Last years Monday Night match up comes to mind. The Rams had been running the ball down the throat of the Seattle Seahawks all game long and Zac Stacy was having one of his best career games. From the one yard line and the game on the line, Shotty proceeded to call a fade pass from Kellen Clemens to Brian Quick. Well that was before Quick had begun to break out. Even if Quick was playing up to the standards such as earlier this season, Clemens didn’t put the ball in a place where any receiver could have gotten to it.

Schottenheimer seems to take a “They know we want to do that, so let’s do something else” approach. That’s great and all, but when you stray from your strengths as a team to call a play that the defense won’t expect, your team won’t be able to execute like they normally do.

Why, in both the instances I have mentioned, would the Rams not run the football? Is it because they want to throw off the defense and try to get someone wide open? Is it because they have too much trust in career back up QBs? The answer to both of these questions could easily be yes.

This is not the only case that Rams fans have against Schottenheimer though, another point is his creativity, or lack of.

Brian Schottenheimer has been said to not be creative enough to get Tavon Austin and all of his talent the football in open space. Tavon Austin is a player who needs open space to showcase his talents. Instead we’ve seen him ran straight up the middle. Isn’t Tavon not on kick returns because of fear of injury? So why run him directly at the opponents middle linebacker? This is something we may not ever understand as fans.