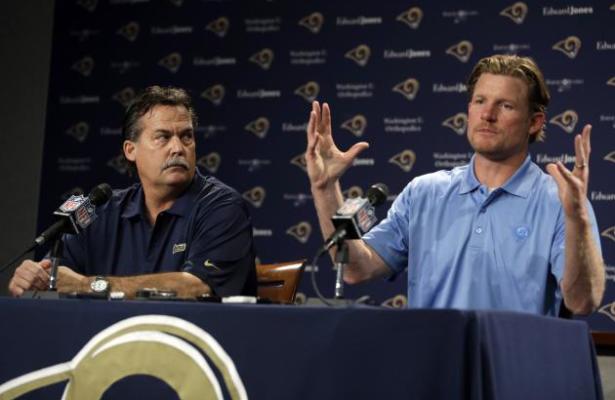 Well, we’ve gotten here. The St. Louis Rams are officially eliminated from playoff contention with a loss to the Arizona Cardinals on Thursday Night Football. With no playoffs in the near future for St. Louis Rams fans, I figured I’d take a look at the off-season a little early to keep everyone up to date.

The St. Louis Rams fan base has exploded with cries of wanting Brian Schottenheimer out of St. Louis. Don’t be surprised if you start seeing “Fire Shotty” signs in the crowd from Rams fans after Schottenheimer wasn’t able to get the Rams offense to do a whole lot of anything against the Cardinals. Whereas the Cardinals do have a strong defense, the Rams not being able to move the football at least a little bit to start the second half is a cause for concern. The Rams are the only team in the league to not score on their first possession of the second half of any game. The proper adjustments just have not been made.

So where does this leave the Rams? Well, there are still a lot of pieces on this team that are very workable. The St. Louis Rams have shown that they can compete with anyone in the NFL, but with inconsistency at arguably the most important position on the field, something has to change.

The Rams don’t have a whole lot of players with expiring contracts coming into this off-season. With only a couple of big names on the list, it’s not likely that the Rams have a lot of these guys back. Here are the few that should be resigned.

Kenny Britt - Kenny Britt has been a little bit of a bright spot on the offensive side of the ball. His downside is that he rarely will fight to get to the football in traffic. His upside is that when he does he has great body control and good hands.

Shaun Hill - I think we can all agree that Shaun Hill should not be brought in as a starting QB. Beside the fact that he will be 35 years old next season, he just isn’t a play-maker. Shaun Hill is best used as a serviceable back up. Maybe even a third string. His experience is a comforting thing on the bench though.

Joe Barksdale - Joe Barksdale has had a rough couple of weeks. But his knowledge and talent level are hard to deny. When you have to cover for your guard all the time it’s hard to keep your own guy blocked also.

Lance Kendricks - Kendricks is a great TE. This guy can do everything that Jared Cook can do, maybe just not as flashy. And he’s more affordable than Cook.

Rodney McLeod - McLeod has been a solid option for the Rams at safety. He is a hard hitting aggressive safety perfect for a Gregg Williams defense. Unfortunately, he still needs some coaching as he bails on his deep zone too often giving up deep touchdowns. Dez Bryant and Emmanuel Sanders come to mind.

Corey Harkey - Harkey is a great option and versatile player that is a Tight End and Full Back option for 2015.

Contracts that the Rams should let run out:

Davin Joseph - Joseph has been a very weak link on the offensive line. Joseph might not even be good enough to have as a back up. His dirty reputation and lack of talent are not something the Rams need to keep around.

Austin Davis - The Austin Davis project is over. Let him find a new home as a back up somewhere else.

Mike Person - Lack of talent from Person also. Major upgrading should be done to the offensive line and Person should be gone.

Brandon Washington - Another under-talented offensive lineman. Are you seeing a trend here?

The Rams are a talented young team. Something that could very well be missing here is veteran leadership. Sure Sam Bradford is on the sideline, but how much is he providing? Probably not that much. Shaun Hill? I’m not sure how excited the team is to listen to a guy who has never EARNED a starting job. Really the veteran leadership is coming from just two guys. Chris Long and James Laurinaitis. They need some help and free agency is a good place to get that veteran presence. Here are a few guys the St. Louis Rams should look at this off-season.

Wes Welker - Sure this won’t be popular, but think about if Sam Bradford came back to having an emerged Brian Quick, a calmed down Kenny Britt, a Tavon Austin who has kind of found his place in the offense, and a veteran slot guy like Welker? That could be pretty exciting. And Welker might like that he won’t be forgotten in an offense anymore.

Jeromey Clary - The Rams need someone at guard to replace Davin Joseph. Clary should be able to be bought for about $3.3 Million. Not a bad investment on the O-line.

Jerome Felton - The St. Louis Rams want to be a running team. But they’ve been using tight ends at full back for too long now. Why not get a guy that is designed to play full back? Let Harkey play tight end and bring in Felton.

Willie Colon - Sure he’s a little older sitting at 31 years old right now, but that gives the Rams a safe bet at guard while they wait for the perfect person to show up in the draft to groom under this veteran. For about $2 million this is also a pretty safe investment.

It looks like the Rams will be sitting just around the middle of the draft. Most likely anywhere from 12 to 16 in each round. So who should the Rams target? Well I’m not going to do a mock draft right now since the college football season isn’t over yet and we still aren’t sure who will be coming into the NFL, but I will look at positions of concern or potential for the St. Louis Rams.

QB - This one might be a little too obvious, and I don’t think that the Rams should go QB in the first round. Especially since it has been reported that the St. Louis Rams are working on a deal with Sam Bradford to bring him back under a much lower cap hit in 2015. This spot needs to be solidified though. If, God forbid, Sam Bradford gets hurt AGAIN, the Rams need to have a guy ready to play that they feel so confident with that they almost started him anyways. That could be a rookie that they want to groom for a few years or until they find out exactly what they want from Sam Bradford in the future, if anything.

OG/C - Roger Saffold is a good option on the offensive line, but the shoulder injury that saved him from having to be an Oakland Raider is still haunting him and it’s showing that he will at least miss a few snaps and/or games here and there throughout a season. The other guard spot should be open with the likely exit of Davin Joseph. At Center, Scott Wells just isn’t the same as when he was a Packer, and Barrett Jones isn’t getting the game time to learn the ropes. I fully expect a new Center running the offensive line next season.

OLB - I say outside line backer because it seems unfair to single out the offense. And no, not Alec Ogletree. Jo-Lonn Dunbar could be seeing his starting spot lost soon and some more youth could benefit this defense even more. We all thought Ray-Ray Armstrong was going to come in and take Dunbar’s spot eventually, well that didn’t happen so I expect them to look towards the draft to get another line backer that fits an aggressive Williams defense.

The St. Louis Rams front office is certainly leaving the rest of the games to the coaching staff as they start to prepare for next season. Jeff Fisher and Les Snead have nailed all their drafts since coming to St. Louis, but they have effectively missed big time in free agency. We’ll see if that can change this year. We’ll see if Jeff Fisher can stop letting his heart get in the way and stop signing ex-Titans.

The off-season is a slow moving creature, but a very important one. Each phase has it’s importance, and none can be ignored.