Alex Smith is Out For the Chiefs 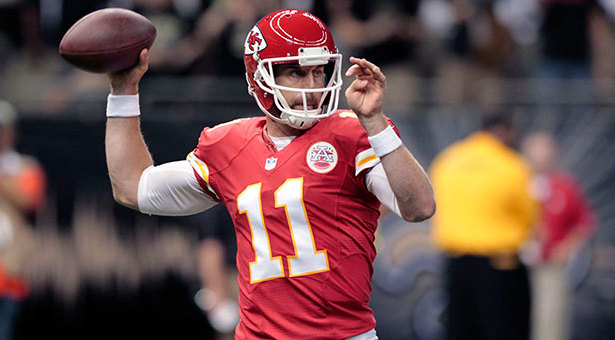 The Kansas City Chiefs are going into Sunday’s game against the San Diego Chargers without Alex Smith.

Earlier this morning, reports were coming out of Kansas City that the Chiefs starting quarterback had suffered a lacerated spleen and would be out for Sunday’s matchup against the Chargers. Confirmed via the Kansas City Star newspaper, Smith sustained the injury completely unaware after taking a hit in the third quarter of the Chiefs’ week 16 game against the Steelers this past Sunday.

“It wasn’t until after I showered and got dressed and the adrenaline was out of me, I noticed some discomfort in my stomach area…I thought it was something I ate. I didn’t necessarily relate it to a hit. But definite discomfort,” Smith said.

After practicing through the discomfort on Tuesday and Wednesday, Alex was prodded by the Chiefs’ team doctor to use the Christmas off day to get checked out further. Smith’s abdominal scan on Wednesday came back to reveal a 3 centimeter laceration and a slight enlargement of his spleen.

Luckily, the laceration is not severe enough to warrant surgery and will heal on its own. Chiefs trainer Rick Burkholder also assured the media that the injury is not career threatening and gave a tentative recovery period of six weeks.

The injury means that the Chiefs will have to rely on the arm of backup quarterback Chase Daniel. It is fitting that Daniel should be starting this weekend against the Chargers, but hopefully not foreboding for the team. Daniel’s only ever NFL start came last season, also against the Chargers, in San Diego. Daniel was a serviceable backup in the game, going 21 of 30 passes for 200 yards and a touchdown, but the game ended up being a 27-24 loss in overtime. For Chiefs fans, hopefully Chase will have learned a little something from that experience and can use the Arrowhead home field advantage this time to get a necessary win and keep the team’s playoff hopes alive.

The Kansas City Chiefs are still eligible for the 6th seed wild-card spot in the AFC, but are fourth in line behind the Chargers, Ravens, and Texans, respectively. The Chiefs can clinch the wild-card spot with a win against San Diego, a loss by Baltimore (vs. Browns) and a loss/tie by the Texans (vs. Jaguars). They are in a must-win-and-pray situation this Sunday for any chance at claiming that last wild-card spot.