Are the St. Louis Rams a playoff team? 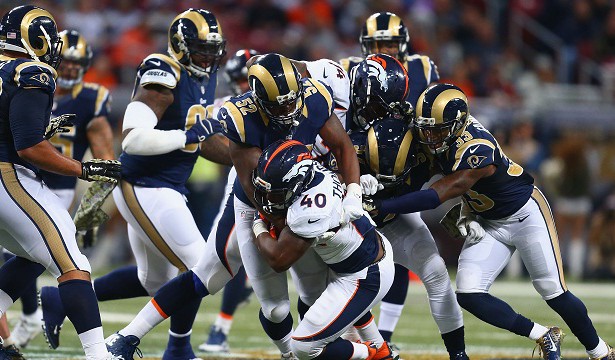 It’s no secret that the St. Louis Rams are a team loaded with talent. From the General Manager Les Snead all the way down to the 3rd string running back, Benny Cunningham, this team is loaded with talent. Perhaps untapped talent, but talent nonetheless.

The Rams started their off-season slow without a lot of moves. That quickly changed when the free agency period began as the Rams shipped their starting QB, Sam Bradford to Philadelphia for QB Nick Foles.

Whether you were an avid Bradford supporter or a ruthless Bradford basher, there’s no doubting that having Nick Foles in place of Sam Bradford gives the Rams much more stability at the position. Which has been the biggest issue for the Rams in the previous two seasons.

The St. Louis Rams finished 6-10 last season, and 7-9 the season before that. In fact it’s been quite some time since the Rams finished a season with at least eight wins. We won’t go into details with that though, it still hurts to think about.

One part of the roster that fans as well as NFL experts have been harsh on is the wide receivers. One detail that these “experts” are failing to take into consideration is that Kenny Britt has yet to take a snap as a Ram with a starting QB, and Stedman Bailey and Tavon Austin have had just under seven games with a starting QB.

With Nick Foles in town, the Rams have an opportunity to at the very least see what they really have at the wide receiver position.

The Rams have undoubtedly upgraded the offensive side of the football which was the real downfall of the previous few seasons.

The St. Louis Rams have a top tier defense and one of the best special teams units in the NFL. By adding an offense that can put points on the board, the Rams are absolutely a playoff team.

How much can we trust the Rams offense to put points on the board though? Sure Nick Foles is a more solid option at QB, but what can he do in his first year with a new team? Sure the Rams receivers are talented, but how will the mesh with a new QB? Sure Todd Gurley is one of the most exciting things to happen to Rams fans in years, but are his injuries a concern?

There’s really only one way to find. We have to wait until the St. Louis Rams kick off against the Seattle Seahawks in September. It may be a while away, but doesn’t the wait make it more exciting?

The St. Louis Rams will be a playoff team in 2015 if their offense can produce enough to give their defense enough rest.