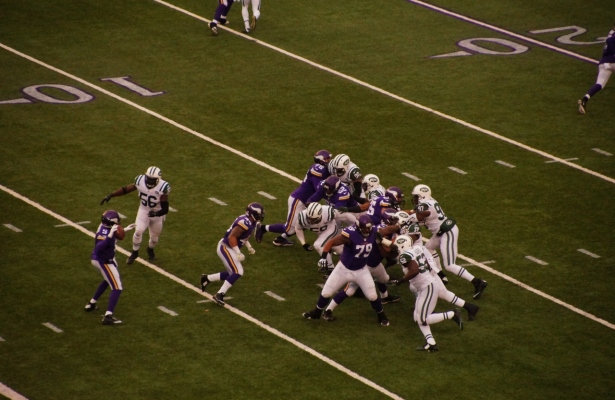 The Minnesota Vikings played host to the New York Jets who have only won two games all year.  The last time Minnesota beat the Jets was back in 1975 when Bud Grant was coaching. A team coming in with two wins always concerns me. that the Vikes may overlook the men from the East and lose. The saying anyone can beat anyone on any given Sunday is something you think about as the game is about to begin.

The pregame was another awesome spectacle as Minnesota Gophers Coach Jerry Kill was the Honorary Viking for the day and was the man to blow the Gjallarhorn. Jerry chants rang throughout the stadium.

The National Anthem was performed by Manny Laureano playing his trumpet. He is the principal trumpet for the Minnesota Orchestra and has been with this outfit since 1981.

Sunday was the anniversary of Pearl Harbor on this exact day and with that said we had a beautiful flyover. It was so neat to be a part of this event.

The Jets get the ball first and who goes back there to receive the kickoff is former Viking, Percy Harvin. He was greeted with a loud round of boos. I am of the opinion that no matter how you feel about the man he is one of the best when he gets his hands on the ball.

The Vikes up early and then disaster as I sit and watch Bridgewater get sacked for a safety, followed by a free kick and then a deep touchdown pass to Percy. On no, you guys, come on these guys have 2 wins and you are giving them unnecessary confidence.

I again was frustrated as I watch the Vikes defense get great pressure on Jets quarterback, Smith and I am standing ready to erupt as a sack was going to occur. The next thing I see is Smith escaping way to many times. The Vikes should have had 5-7 sacks easily Sunday.

Yes, frustration was hard not to have but in the end the Jets settled for 5 field goals. The Jets had the ball in the red zone four of the times and had to settle for field goals.

The Patterson fumble on the kickoff giving the Jets great field position with the game 21-15 and the Jets could only get to the 4 was maybe the biggest save of the day.

The weather temp was warmer than last Sunday but the difference was definitely the cold wind that really made things uncomfortable in the stands.

We survived the four quarters and then the unthinkable, yes overtime. The game through four quarters had no precipitation but funny when overtime began we had some sleet and then snow.

The Jets get the ball and all I can do is hope the Vikes defense comes through for me. I don’t know exactly when but I was starting to lose my voice from yelling. The Jets get stopped and have to punt.

The play of the year occurs next as Teddy Bridgewater makes an unbelievable throw out to Jarius Wright and I stand on the bench in front of me yelling with all my voice I had left to GO GO GO Touchdown and TCF goes bonkers.

A couple notes on fans with once again comes from the beer vendor as he yells out, Get your beer guaranteed to stay cold for the whole game. The other was a fan in zebus and even had his face painted in zebus form. Yes, head to toe in zebus.