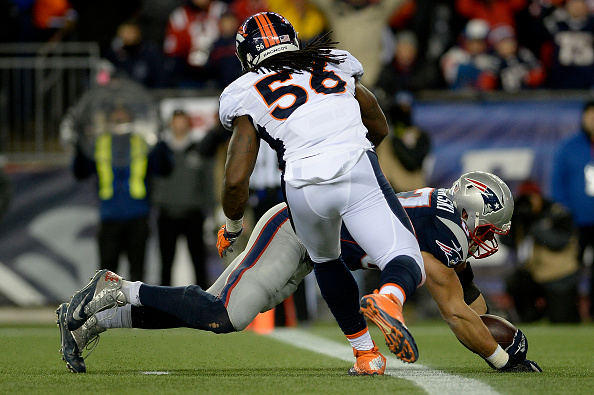 Any of you Bronco fans having the case of the Mondays?

I know I am. After an extremely disappointing 43-21 loss to the New England Patriots, the Denver Broncos limped out of Foxborough, Mass., both literally and metaphorically, giving up 1st place in the AFC, and suffering some key injuries that could effect them down the stretch.

The most serious of the injuries during the game, seemed to be LB Nate Irving, who went down when CB Chris Harris rolled into his knee bending it backwards. Irving couldn’t put any pressure on his leg when trainers tried to help him off the field and he was later carted off, and in crutches after the game.

John Fox stated in his press conference today that it is a sprained MCL and that “It’s still very early.”  He’s not quite sure of the severity yet, as the medical team is still evaluating Irving’s progress daily. Irving has been a key note in the Broncos run defense, which is first in the NFL right now. In eight games, he has totaled up 44 tackles and one sack. The Broncos might experiment this week with OLB Brandon Marshall in the middle and starting rookie Corey Nelson at the weakside spot, but are more then likely going to keep Marshall at weakside, and plug in LSU rookie linebacker Lamin Barrow.

On the offensive side, receiver Wes Welker was once again on the injury report, except this time it was a back injury after this crushing blow by Devin McCourty, that ended up being a Patriots interception. 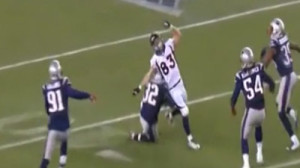 Welker was actually cleared by doctors to come back into the game, but my guess is that since the score was irrelevant, the Broncos coaching staff chose to keep the five-time pro bowler on the bench. Fox didn’t mention much about Welker at his press conference today, other than that he is day-to-day.

Welker has only 22 catches in six games in a limited role since his suspension was reduced. Since his multiple concussion injuries, he also has seemed to be playing more frantic of where the defenders are on the field, as in the Browner interception, he dropped a rather catch-able pass as he took his eyes off the ball bracing for the hit. With Emmanuel Sanders stepping up this season as possibly the best free-agent pickup for the Broncos thus far, Welker has shown both his age and injury history this season, and with a salary cap of $8 million due this offseason, this injury puts more question marks on the future for Welker and the Broncos.