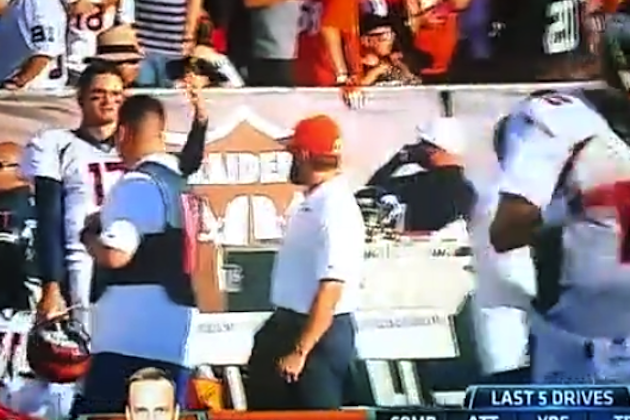 With the Denver Broncos holding a 41-10 lead late in third quarter on the winless Oakland Raiders, Broncos backup quarterback Brock Osweiler started to warm up on the sideline getting ready to go into the game. In past Broncos’ blow out games, Osweiler has been able to go in for some mop up duty and get some experience. With Osweiler backing up one of the best quarterbacks of all-time, he doesn’t get into the game very much. Prior to Sunday, he had only thrown one pass this season — an incompletion in the 42-17 victory over the San Francisco 49ers — and when Osweiler was ready to go in, Peyton Manning went trotting out on the field, and Osweiler was caught in the background waving his left arm in frustration.

Manning only took one more snap to finish off the third quarter, and then Osweiler was put in the game, going 2-for-5 for 13 yards in the fourth quarter. Reporters asked Osweiler Monday of the frustration on the sideline, and he insists the team is all laughing on the situation now and it was all just a state of confusion at the time.

“It’s a good laugh now, there was just a little miscommunication,” he said. ” ‘Am I going in? Am I not going in?’ But no, there’s absolutely no hard feelings or anything like that. We’re all just having a good laugh. It’s funny that it got caught on tape.”

Osweiler later stated that “everyone (on the team)” has seen it and that it’s been pretty comical and everybody is having a good laugh about it.

Broncos coach John Fox addressed that it was his fault that Manning wasn’t taken out of the game on that last play in the third quarter. Fox wasn’t quite sure if Osweiler was ready to go in, and he didn’t know that Osweiler had been warming up since the previous Broncos drive.

“That was really on me,” Fox said. “What happened was we were contemplating, I don’t know, what was there 40 seconds left in the third quarter, I heard something about warming up and in my brain I didn’t think Brock was warmed up yet and I said, ‘Let Peyton finish this off and we’ll bring him out.'”

Osweiler knows he doesn’t get many opportunities, with Manning almost never missing a game or even a practice rep. The team admits nobody knew what was going on at the time during the game, but on Monday, Broncos practice facility at Dove Valley was all laughs on the 6-foot-7 quarterback. Osweiler has played in only 11 games since being drafted in the second round in 2012. It’s safe to say that on the next Broncos blow out, Osweiler will be prepared and have his helmet in hand, ready to go.