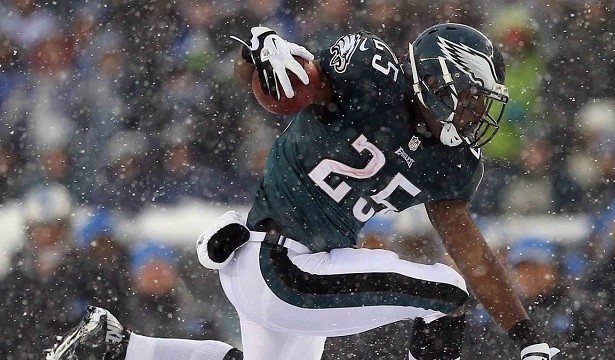 Winning your fantasy football league is all about assessing the value of players, buying low and selling high just like the stock market.  During the draft you want to get players at a good price whether it’s an auction or snake draft, it’s all about the value.  Once the draft is over, the rest of the season becomes about determining the value the players on your roster as well as the other teams in your league.  By the end of week 4 in the NFL season, you will have a good idea of what a player is and what his potential ceiling could be.  There will be players that you missed on in the draft, the idea is to cash in on those guys and get some value out of them before the bottom falls out.  When looking for good buy low opportunities there are three questions I ask myself:  What is this players ceiling?  What is their floor? & What is their current value now?

Players that I see as good Buy-Low candidates right now:

LeSean McCoy — McCoy was drafted as a sure thing, he was labeled as a can’t miss player that should be taken with one of the first 3 picks.  There is a good chance that the team that drafted McCoy is struggling through the first 4 weeks of the season and desperation can cause fantasy owners to make moves they wouldn’t normally make.  McCoy was drafted so high because he has both amazing talent and opportunity, he was the focal point of the Eagles offense in 2013 and I believe that hasn’t really changed.  The McCoy owner is probably worried about his usage in the Philly offense so far, the threat of Sproles taking away touches, and problems with the offensive line in Philadelphia.  While some may be legit concerns, I believe in Chip Kelly’s ability to use his best offensive weapon to put up huge numbers.  So what’s McCoy’s ceiling?  He can be the best Running Back in football.  What’s his floor?  I think we saw that in weeks 3 and 4.  His value will probably not be any lower than it is right now.  I’ve seen some crazy trades involving LeSean McCoy over the past couple of days, trades that would have been laughable less than a month ago.

I think all of these trades favor the McCoy side but number 3 is my favorite, that is a true buy low on McCoy and sell high on Bradshaw.  If I were in this league, I would want this trade vetoed, it’s that one sided in my opinion.

*Eddie Lacy — Most of what I said about McCoy holds true with Lacy as well, he’s a great talent in a great situation.  Lacy has faced some of the toughest run defenses in the NFL through the first 3 weeks and he really struggled.  The owner that drafted Lacy drafted him early in the first round assuming that he was matchup proof and an every week start no matter who the Packers are playing.  I still think that’s the case, I still see him as true #1 RB that will produce top 12 numbers at the end of the season, which means he has some catching up to do.  Lacy is being called Trent Richardson 2.o by some people, if the Lacy owner in your league is doubting Eddie Lacy’s talent, you could really profit from the buy low opportunity.

All of these trades happened in real fantasy leagues, leagues I wish I played in.  In the next 4 weeks The Packers have matchups against Minnesota, Miami, Carolina, and New Orleans before their week 9 bye.  The Vikings are the only team of those 4 that are above average run defenses through the first quarter of the season, this is your last chance to buy low on Lacy.

*Edit— I took too long finishing this article and after the game Lacy had on Thursday Night, you probably missed your chance to buy low.  But I still believe that he will continue to improve and be a #1 RB going forward.  I would pay full price for Lacy if I can get him in any leagues.

Demaryius Thomas — Thomas has not gotten off to a great start over the first few weeks of the NFL season, through 3 games Thomas has 13 receptions for 141 yards and only 1 Touchdown.  The Broncos are coming off a bye in week 4 which should have given Demaryius an opportunity to get fully healthy, he’s been dealing with a nagging injury early on (sore foot) that has limited him.  To put his production to this point in perspective, Thomas had 13 receptions in the Super Bowl against Seattle last year.  Thomas is in one of the most potent offenses in the NFL and has elite talent, his ceiling is the best WR in the league and I think we are seeing his floor.  The emergence of Emmanuel Sanders in Denver and Wes Welker coming back into this offense might give fantasy owners reasons to doubt Demaryius Thomas will be the focal point of the Broncos passing game.  I disagree, Thomas is one of the best WR’s in the league and in the elite class of Fantasy WR’s with Calvin Johnson, Julio Jones, Jordy Nelson, and Antonio Brown.

Obviously Desean Jackson for Demaryius Thomas is a great trade for the Thomas side, you may not be able to pull off this type of trade but it’s definitely worth checking to see if the Thomas owner is frustrated with his performance so far.  Try to get Thomas on your fantasy team, he will put up big numbers the rest of the year.

Players I see as Sell-High Candidates:

Eddie Royal — So far this year Eddie Royal has 17 receptions for 239 yards and 4 touchdowns, I do not believe that this type of production will continue.  Just look at what Royal did last year, Royal scored 8 TD’s in 2013 but 5 of those TD’s came in the first two weeks of the season.  Royal is Mr. September when it comes to fantasy production, if you can find someone that is buying this get what you can for him.  My prediction is that he will end up on the waiver wire in a lot of leagues by the end of October so now is a great time to cash out when it comes to Royal.

Ahmad Bradshaw — Ahmad Bradshaw is currently the #4 Ranked Fantasy Running Back going into week 5 and that is only because of the touchdowns that he is scoring in the passing game.  Through 4 weeks he has 34 carries for 182 yards 0 rushing TD’s and 14 receptions for 143 yards with 4 receiving TD’s.  Bradshaw is still sharing carries with Trent Richardson and the Colts seems to be managing his workload because of durability concerns.  That is the biggest reason I see Bradshaw as a Sell-High, because I just do not believe he can stay healthy for 16 games.

Martellus Bennett — The Black Unicorn is off to a hot start in 2014 and appears to be primed for a breakout season.  That could happen but if you look at his history you will see that like Eddie Royal, Bennett has put up good numbers early in the season before only to disappoint after the first few weeks.  Bennett currently has 29 receptions for 295 yards and 4 TD’s.  Bennett has never had more than 65 receptions, 759 yards, or 5 TD’s, that was his stat line in 2013.  The problem I have with his 2013 production is if you look at his game log for 2013 he had 3 of his 5 TD’s in September and after the first month of the season his production really tailed off.  The same thing happened in 2012 with Bennett, 3 September TD’s and he finished with 5.  Maybe The Black Unicorn should get Mr. September label.  He will probably have a career high in TD’s this season but I do not see him keeping up this level of production, he is likely going to finish the 2014 season as a Top 5 Fantasy TE but probably between 6-10 rather than top 5.  If you can get Top 5 TE value from him in a trade, I say pull the trigger.