Kerr Has The Experience To Beat The Cavs 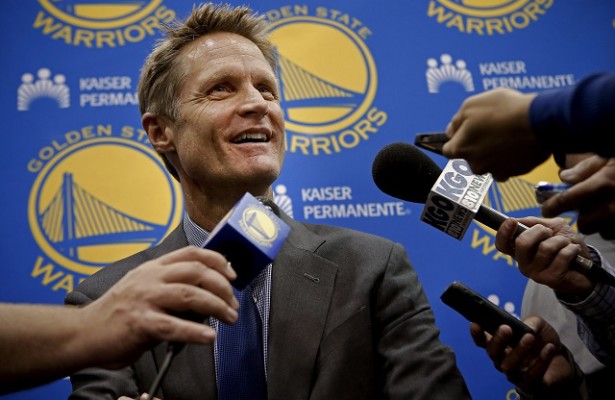 The NBA Finals are set with the Cleveland Cavaliers taking on the Golden State Warriors in what is sure to be a powerhouse explosion. When you look at the teams matchups the first thing that comes to mind is LeBron vs Stephen Curry but there is another part of this game that probably will not be talked about until today. Steve Kerr.

Everyone thought Kerr was the shoe-in to take over the Knicks HC job but at the last minute he turned down his former coach and headed out West where the opportunity was too hard to pass up. He had good reason to do so. One on hand you had the chance to coach Carmelo Anthony and, wait that’s it. On the other side you get to coach Curry and fellow Splash Brother Klay Thompson who is younger and more willing to play a little defense as to Anthony who has no desire to get his hands dirty. Man did Kerr dodge a bullet there.

But here is a bullet that Kerr cannot dodge and it is his teams inexperience in the NBA Finals. So what. The Cavs have players that has been to the Finals like LeBron, James Jones, Marion, Miller, Perkins and Varejao while the Warriors have none but what they do have is a man that can teach them how to win in the Finals.

Players play the game without a doubt but it goes deeper than what’s done on the court. Jordan didn’t know how to win until Phil came along, same thing with Kobe and Shaq, Duncan and the Big 3. The Spurs will follow Pop into hell with gasoline drawers on if he told told them to and that is the leadership that Kerr brings into these Finals. For you young kids out there who have no idea who Kerr is, allow me to reintroduce him.

16 seasons played in the NBA

I know that may not seem like much to you and you may be shaking your head thinking what’s the point. Well little guy here is the important info on Kerr

Oh wait that still isn’t enough for you, I have more.

Did I forget to mention that he was part of the Chicago Bulls 3-peat with Micheal Jordan or a 2x champion with Tim Duncan and Pop?

What does this all mean you ask? The current Warriors might not have the Finals experience but what they do have is the coach that as been there. He has played with some of the great players, Jordan, Pippen, Duncan, Robinson. Has been coached by the two best that has even done it in Jackson and Pop so why do people still question the experience of the Warriors? You mean to tell me that between now and the start of the Finals Curry and Thompson will forget how to shoot? Green and Bogut will forget how to defend? Come on be serious. Kerr didn’t have experience as a head coach but yet he managed to win 67 games his first season. The current Warriors team didn’t have Conference Finals experience either but somehow managed to blow that stereotype up. Do you not think that has something to do with the leadership of Kerr?

Just take a look at how the team is constructed and Kerr’s rotation. Curry (Jordan, Duncan) is the star with Thompson (Pippen, Robinson) playing second-fiddle then comes Green ( Kukoc, Ginobili). Bogut ( Rodman, Elliott) is the defensive stopper and the bench is held down by former All Stars like Iguodala and Lee plus scorers such as Livingston and Barbosa. The Warriors are built in the mold of past champions. Star players who trust their supporting cast. What about stopping James? You’re asking this from a player/coach who played with some of the best defenders in NBA history with Bruce Bowen, Robinson, Duncan, Pippen, Jordan and Rodman and yet people still question his coaching abilities. Oh wait weren’t the Warriors ranked in the top 5 in Team Defense this year as well as Team Offense. My bad, for minute there I thought HIS playing experience didn’t make a difference as a coach. There is a reason he was Phil’s first choice.

When the Finals start do you not think that Kerr will know when to make certain adjustments, when to call timeouts and when to get on the refs for calls they may have missed. This is what a coach does but this is what an ex-player with 5 championships remembers and will teach his team. Yes Curry and Thompson will have to still go toe-to-toe with James and Irving but Blatt will have to go toe-to-toe with Kerr as well.