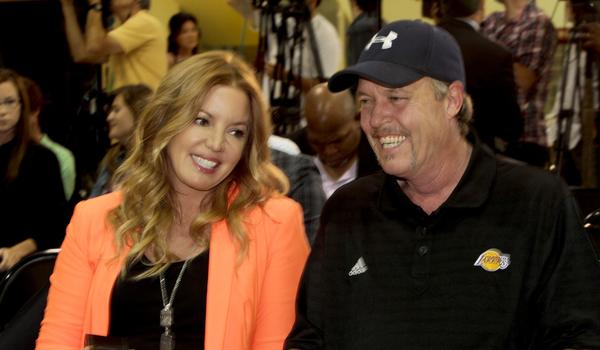 The Los Angeles Lakers are not the same storied franchise that they once was, who is to blame, Kobe, Jeanie, Jim, or Mitch? Let start with the person who doesn’t need to be in this conversation and that is Kobe Bryant. Ever since he stepped on the floor he has given the Lakers his all even when he didn’t start at the beginning of his career. He gave the Lakers organization 5 more championships and helped keep the brand at the top of the NBA. Now he is in the midst of a mess that some have blamed him for. How could you blame him, he has held up his end five times? Kobe Bryant has come back from devastating season ending injuries two years in a row and he looks to be still at the top of his game. He has not picked his current roster, he is not in the front office scouting players either, he just plays the hand he is dealt and goes out and does his job on a nightly basis. Kobe has the weight of the Lakers on his shoulders, which has been that way since he and Shaq parted ways. Look at the talent or lack thereof, Nick Young, Jeremy Lin, and Carlos Boozer( who is done by the way). You can’t win with this roster, I don’t care who you are, even the great Michael Jordan couldn’t. Some would look at how much money Kobe took from the Lakers and say that has hindered their chances of building a team now and in the future. It is the front office’s job to work around it because they agreed to pay him like the superstar he is.

Now let’s get to the front office, and we start with the head of this business, Jeanie Buss. Most people think she should be running the basketball operations.  She has a cool head and gives off the vibe that she is more suited for this than her brother Jimmy.  Jeanie is the owner but the only reason she is not running the basketball side is because it was her father’s dying wish. Jeanie said that she has the final say whether someone gets fired or not. So why not fire her brother who hasn’t done his job? She also went on record to say that they (Mitch and Jim) has three years to get the Lakers back to a championship caliber team. As far as I can see Jeannie should be running the basketball side of things.

Mitch Kupchak has been the General Manager since Jerry West went to Memphis. Mitch has done his job successfully for the most part throughout his tenure but lately his non- action on quality free agent signings has been weighing thin with Laker fans. It started to fall apart for Mitch when talks went south on Dwight Howard and just this past offseason with the non signing of superstar Carmelo Anthony. Mitch hasn’t been able to make the big splash or the splash that could get the Lakers back into contention for a few seasons now and the fans are starting to call for his head on a platter. Time is running out on the Lakers as they search desperately for the next big name to carry on the legacy of the franchise once Bryant decides to retire.

Knock, knock, Jim Buss, hello is anyone home? I don’t think so because he haven’t seen or heard from him in quite a while. Jeanie and Mitch have been the voices lately, but where are you? You are the reason for this mess, yes you Jimmy and you need to take full responsibility, not your sister. Jim, you have made mistake after mistake after mistake and Laker fans are tired of it. We want a winning team on the floor and yet you continue to provide us with washed out, overrated, hyped-up scrubs. You finally gave us a decent coach but he doesn’t have the players to win with. If you keep this up your going to ruin Bryon Scott’s career as a coach. We had a shot at Phil jackson, a 11-time champion but no, your ego got in the way and we had to settle for Mike D’Antoni. Before that it was Mike Brown instead of Brian Shaw or one of Phil staff members. You have to feel the disappointment of your father as he was able to do what you could not and that was sweet talk any free agent superstar into Purple & Gold. Jim, can you please get it together or just do us all a favor and find a nice spot in the Bermuda Triangle and vanish? We want a winner, a warrior, a fighter, a person that will do whatever it takes to win.

is my american shipper safe