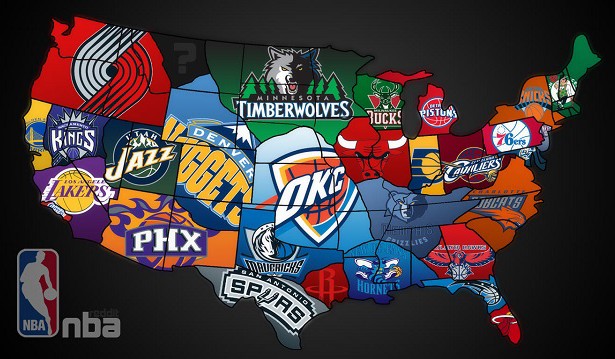 Welcome to Truluvsports NBA Power Power Rankings. The season starts this week but I decided to share with you where I see teams right now. We have no idea what the season holds in store for our favorite sport but it promises to be entertaining. Will someone knock off the defending champs? How good will the Cavs be? How many games will the 76ers tank away? Can the Bulls find the right chemistry with Rose being back? I admit I can’t wait until the season kicks off but in the meantime take a look and see where I placed your favorite team. I’m pretty sure teams will surprise and even disappoint us but that’s why they play the game right? Enjoy.

30. Philadelphia 76ers: As much of a fan as I am I will have to get used to wearing those old New Orleans Saints paper bags over my head this season.

29. Utah Jazz: The Jazz have a young nucleus but will have to go another season or two with countless losses before their roster reaches it’s potential.

28. Milwaukee Bucks: Jabari Parker is good but is he good enough for the fans to relive the Ray Allen, Glen Robinson days?

27. Orlando Magic: The Magic are going through their typical rebuilding phase again this year. If he can stay healthy I expect Tobias Harris to have a breakout year.

26. Sacramento Kings: No matter their record, future with the city or lack of chemistry in the locker room I still believe this team can make some noise. They have a stock pile of young veterans who need to step up.

25. Indiana Pacers: These are not the Pacers of past years. They fell apart for whatever reason since the trade of Danny Granger. The offense was suspect at best with Paul George now what do they do? No George, no Stephenson and for a while no David West.

24. Boston Celtics: The Celtics could be a sleeper team if Rondo buys in. Sullinger, Green, Smart, Bradley and Turner can turn some heads only if they believe they can.

23. Detroit Pistons: I gave them too much credit last year and they spit in my face. Drummond, Smith and Monroe are probably the best frontcourt in the NBA but play like they have no idea they are on the same team. Wasted talent.

22. Atlanta Hawks: The East is still pretty weak so a team like the Hawks can make some noise. We know what Millsap and Horford can do but the season hinges on Teague and his continued growth.

21. Phoenix Suns: I may bite the bullet for this one but I don’t see them having the same success they did last season. Bledsoe could be gone by the trade deadline and with a few Western Conference teams healthy this season the Suns will lose their spot in the top 8.

20. Minnesota Timberwolves: No Kevin Love but they do have the #1 pick in Andrew Wiggins. Rubio is there but so is his limited offensive game. Thad Young, Pekovic, Kevin Martin could have the Wolves contend for a playoff spot if they can learn team ball.

19. Denver Nuggets: The west is tough and the Nuggets are on the fence of either a breakthrough or a total collapse. Lawson, Gallinari, Affalo and Faried are back together healthy but they must master coach Shaw’s philosophy.

18. Los Angeles Lakers: Kobe is back but the lack of true chemistry will hurt them come stretch time. Boozer was a great pick up and teaming him with rookie Randle will help the Lakers. They have shooters but rebounding and defense will be a problem. They can sneak into the playoffs.

17. New York Knicks: This is still an Eastern Conference team so anything can happen. Melo will be Melo but what is to be expected from JR Smith and Stoudemire this year.

16. Brooklyn Nets: This is a veteran group of player’s mixed in with the right amount of youth coming off the bench. Williams must continue to play like he did in the preseason but the season hinges on the foot of Lopez.

15. Memphis Grizzlies: Their time has come and gone for a championship but they are still a playoff team. They have always been a team that was missing the last piece but it’s too late now. Randolph and Gasol are tough inside but their perimeter game will continue to drag them down.

14. Dallas Mavericks: They are the opposite of the Grizzlies. They have the offense but lack the defense unless Chandler can stay upright for at least 70 games.

13. New Orleans Pelicans: This is their year to make that giant leap like the Warriors did two seasons ago. Davis is ready, Holiday has been an All-Star, Evans can produce and Gordon alone can shoot them into the playoffs.

12. Toronto Raptors: The Raptors took advantage of a weak division last year and might do the same again. But their youth and inexperience showed up in the playoffs against a veteran Nets team. DeRozan and Lowry are a great combo but help must step up for them to take the next step.

11. Charlotte Hornets: Go ahead and laugh but the Hornets are much improved as a playoff team. The addition of Lance changes the whole dynamic of the team. Kemba, Jefferson did the heavy lifting last season now their offense and defense just got a significant boost.

10. Washington Wizards: Is this the year? Can Wall and Beal stake claim as the best backcourt in the NBA? Can Nene and Gortat stay healthy long enough to anchor this unit? We cannot forget the major offseason signing of Paul Pierce.

9. Houston Rockets: I’m sorry but I don’t get all the hoopula. They have a great inside/outside game but that’s it. Their defense is suspect and puts Dwight Howard in a bad position 90% of the time. Harden must learn to play both ends of the floor before the Rockets can contend. The loss of Parsons will hurt.

8. Oklahoma City Thunder: Durant is out for two months or more and Westbrook must carry the team with help from bench players. Can it be done/ Yes, but if not careful not even Durant can save them.

7. Miami Heat: We know that LeBron pulled a LeBron and ran after a tough loss but the Heat won’t miss him as much as everyone expects. Great additions with Granger and Deng coupled with Chalmers, Wade and Bosh will keep this team in contention. Did I mention they still play in the East?

6. Golden State Warriors: Curry and Thompson can drop 50 combined any given night, easily. The frontcourt still has David Lee, defensive ace Bogut and do-it-all forward Iggy. The chemistry is there and so is the taste of playoff failure to help fuel them.

5. Portand Trailbalzers: Did the Blazers peak too early or are they ready to contend with the big teams? Lillarad is a bonafied star while Aldridge is much underrated. Great combo of inside/outside mixed with a defensive tenacity that screams championship team.

4. Los Angeles Clippers: They are by far the hardest team in the NBA to figure out. The roster is stacked at every position but still come up short year after year. Paul is the best at his position, Blake is one of the best at his, Jordan is proving he can handle duties as a center but still something is missing.

3. Cleveland Cavaliers: Yes I have them third. LeBron will dominate, so will Irving and Love. They have a talented roster behind them but they must first learn to play as a unit. How will Love react to being third fiddle? Can Irving and Waiters put aside their difference for the better of the team? They will be good once they figure out who they are.

2. Chicago Bulls: Rose is back and ready to attack. Noah has held it down for two years and has improved his game while Jimmy Butler has come out of nowhere and emerged as a viable piece to the puzzle. Gasol is the link to a Finals birth with his defense, scoring and passing.

1. San Antonio Spurs: The Spurs have been to two straight Finals pretty much with the same core so why should anyone be ahead of them on any rankings? The original Big Three is ready to do it again while all pretenders keep trying to stack the deck just to keep up.

One thought on “NBA Power Rankings”