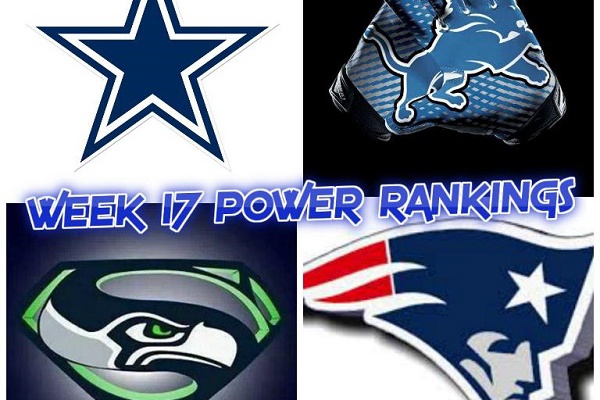 Welcome to Truluvsports Week 17 NFL Power Rankings. Another wild week in the league is down and we now have somewhat of a playoff picture getting clearer. The Patriots, Seahawks and Lions are still leading the pack but the Cowboys, Bengals and Broncos are right behind them. The Jaguars, Titans and Jets have one more week for the #1 pick, while teams like the Saints, Dolphins and Eagles will be left wondering what happened this year. Let’s dive in.

31. Tampa Bay Buccaneers (2-13): QB is not their problem, they have the talent to be successful, they just need a change of attitude.

30. New York Jets (3-12): Not a playoff game for the Patriots but the Jets needed to play like it was one for them.

28. Jacksonville Jaguars (3-12): Yes your reading this right, the Jags have more heart and competitive fire then the Bears.

26. Washington Redskins (4-11): A division win is a great win for any team but to see RG3 back doing what he does best puts the Redskins in a tough situation.

25. San Francisco 49ers (7-8): You can’t blame the coach for every defeat, at some point you have to want it for yourself.

24. Cleveland Browns (7-8): What was once a promising season has turned into a letdown but it’s something to build on.

23. New Orleans Saints (6-9): Under pressure for the 2nd straight year and they crack once again.

22. St. Louis Rams (6-9): The opportunity to make a winning season was in their grasp but they forgot to play their ‘A” game against the Giants.

21. Minnesota Vikings (6-9): They can go toe-to-toe with anybody, now they must learn how to pull the close ones out.

20. Atlanta Falcons (6-9): The Falcons are in a fight for their lives in the NFC South, unlike the Saints they are handling their business late in the season.

19. New York Giants (6-9): Not playoff bound but the Giants have a chance to end the season on a positive note.

18. Carolina Panthers (6-8-1): The sense of urgency has awaken the Panthers. Showdown time with Atlanta, winner takes all.

15. Philadelphia Eagles (9-6): A three-game losing streak is what it is, no matter the competition.

14. Miami Dolphins  (8-7): The Dolphins put up a good fight this year and proved they can play with the big boys.

13. Houston Texans (8-7): I still believe that Cutler will be the best fit for the Texans. Can you image the season if there was a reliable QB and Clowney was healthy?

11.San Diego Chargers (9-6): With Phillip hurting, the Chargers still have a shot at the playoffs.

10. Indianapolis Colts (10-5): A defeat that would leave your grandmother talking bad about you at the dinner table.

8.Pittsburgh Steelers (10-5): Big Ben and Co look to make plenty of offensive noise in the playoffs.

7. Denver Broncos (11-4): There goes home-field advantage but does it really matter?

6. Cincinnati Bengals (10-4-1): The Bengals have punched their ticket again for the postseason.

2. Seattle Seahawks (11-4): The Seahawks have gained their focus and have the look of a repeat champion.

1. New England Patriots (12-3): The Patriots continue their march to Arizona.