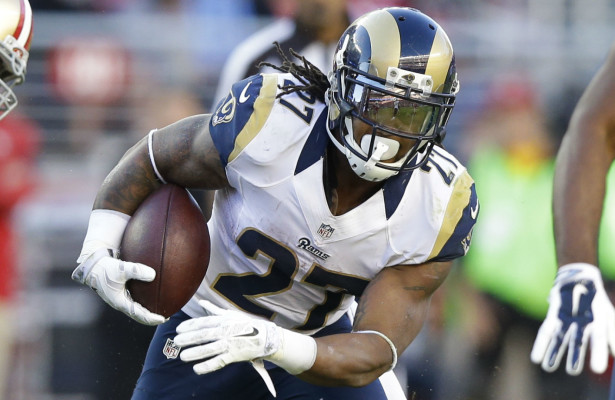 We’ve done it Rams fans. We’ve made it all the way to June without football. It’s been tough, but here we are. With the Free Agency and the NFL Draft in the rearview mirror, it’s time to start looking ahead. All the way to September 13th when the Rams take on the Seattle Seahawks in their season and home opener of 2015. There are certainly some important preseason match ups to watch to see exactly who will take advantage of the opportunity to play in the NFL, and who will fail to arrive and be sent packing. Today I’ll take a look at the projected depth chart of the St. Louis Rams for an early look at the favorites to make the final roster. Let’s get started.

It is not hard to believe that Nick Foles will be the starting QB this season for the St. Louis Rams. Where the Quarterback position gets interesting is the back up role. The Rams now have three Quarterbacks who could handle the clip board duties, but who will get the nod? Rookie Sean Mannion has an opportunity to earn the role ahead of Austin Davis and Case Keenum. Case Keenum has game experience and some experience with the players on the team he gained in a short stint with the Rams last season where he did not see any game action. Austin Davis started eight games for the Rams in 2014 and clearly has the most team experience of the four Quarterbacks. It is hard to tell how much that will factor into the decision, but it certainly cannot hurt him. Sean Mannion will get his fair share of snaps in the preseason and this will likely result in a roster spot for the Ex-Oregon State Beaver.

The St. Louis Rams have a ‘good problem’ when it comes to the running back position. 10th overall pick Todd Gurley figures to get a lot of attention and plenty of playing time with multiple NFL analysts calling him the “best prospect since Adrian Peterson”. Tre Mason will be coming into his second season after becoming the Rams feature back in 2014. Benny Cunningham is also in the mix and has seen plenty of carries in his time with the Rams. The starting role will likely not make too much of a difference in this group as the Rams will likely run a rotation between the three players. It is also an interesting note to say that in the previous three seasons, a rookie has lead the Rams in carries and in rushing yards. Tre Mason took the bulk of the carries in 2014, Zac Stacy in 2013, and Daryl Richardson in 2012. Will we see that trend continue this season with rookie RB Todd Gurley? Only time will tell, but since we are looking at September 13, it’s hard to not go with Tre Mason as the starter.

The St. Louis Rams have some interesting decisions to make when it comes to the wide receiver position. Kenny Britt will be playing with the best Quarterback that he’s seen in his NFL career in Nick Foles, Brian Quick was finally able to break his confidence issues in 2014 before being lost for the season due to a torn rotator cuff, Tavon Austin finally has an offensive coordinator that doesn’t go by the name ‘Shottenheimer’ and Stedman Bailey is finally taking steps to show himself, the coaches, his teammates, and the fans that he might have the best hands on the roster, and every receiver on the roster will finally remember what it’s like to not play with a backup Quarterback throwing them the football. This should especially help Chris Givens who was rendered useless without a Quarterback who can consistently throw a deep ball. New comer Bud Sasser will also need to take advantage of preseason snaps to show the coaches he deserves to stick around. I fully expect this groups depth to fluctuate as the season progresses until the coaches find that “sweet spot”.

The Rams offensive line is one group that worries most fans more than any other group. The Rams drafted four offensive linemen who all have a very real chance at making the roster considering the lack of depth that was on the roster prior to the draft. The left side of the line won’t look different with Greg Robinson and Roger Saffold manning left tackle and left guard respectively, but the other three positions will likely see new faces. The Rams were unable to bring back right tackle Joe Barksdale who signed with the San Diego Chargers, but that spot will likely be filled by rookie Rob Havenstein. The center position is somewhat up in the air, and could easily become the weakest part of the line, but the Rams do have options at that position as well. Tim Barnes and Barrett Jones look to be the two battling for the spot, but Jones has had some injury issues in the past.

I wouldn’t expect any changes from 2014 at this position. Jared Cook, Lance Kendricks, and Corey Harkey all return to the roster. Harkey spends most of his snaps at the full back position, but that could be changing this years.

The St. Louis Rams’ offense will have a different look this year. With new offensive coordinator, Frank Cignetti at the helm, Rams fans may be in for a treat in 2015. Nick Foles and Todd Gurley headline the new stars at the skill positions and Rams fans are hopeful that their days of offensive line busts are over with Rob Havenstein and Jamon Brown added via the draft. The Rams defense steals the show most of the time in St. Louis, but it could be time for the Rams offense to awaken. Something Rams fans haven’t seen since players such as Torry Holt manned the roster.