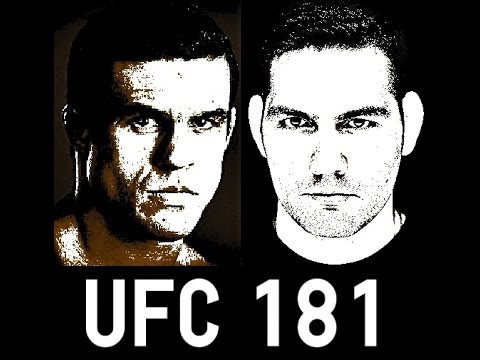 After a string of lackluster PPV fight cards, UFC 181 looks to turn that around.  This Saturday we will have 2 championship fights and every fight on the main card has the potential to win ‘fight of the night’.  If you’ve been saving your money waiting to order a PPV that will give you what you pay for and then some look no further.  While the technical aspect of the ground game is fun to watch there is nothing more exciting in MMA than a knockout, and taking a closer look at each fight you will see that everyone has that one punch knockout ability.

The first fight on the main card looks to be a scrappy lightweight fight where the winner will break into the top 10 rankings in the division.  Ferguson is a former TUF winner who uses his speed to land quick accurate combinations and avoid damaging shots.  Trujillo is a former NA1A All-American wrestler who has become one of the more dangerous strikers in the division.  Abels ground and pound is second to none as he uses his wrestling to gain and hold positions to unload with punches, knees, and elbows.  Tony has the ability to submit off his back and has tremendous take down defense.  If Abel shoots for a double leg then expect Tony to sprawl and transition into a headlock where he can start working his ground game looking for a submission.  This fight is a coin flip though and while Vegas has Ferguson as the favorite I expect Abels power to be the game changer in this fight.  I see Trujillo winning this by a close decision.

The second fight on the main card has the makings of a quick one.  Duffee is set to make his return to the UFC after a 2 year hiatus from illness and was handed a fighter that suits him perfectly in Hamilton.  Duffee is a pure freak of nature with power and the only real question mark is will he still have the explosions in his hands that he had.  Hamilton is no pushover though, he has good all around fighting ability and will no roll over giving Duffee an easy win.  Todd is 8-2 in his MMA and every single fight has ended in a knockout, with only 2 of his fights making it out of the first round.  Expect Hamilton to try to take Duffee down, but don’t be surprised if he has little success in it.  Todd is the faster stronger fighter and should have no problem finishing this fight quickly with combination punches.  I see Duffee winning this fight by knockout late in the first round or early second.

The third fight on main card features 2 heavyweights looking to add their name to the championship mix in a weak division.  For being such a big man Browne has surprising athleticism and he is very light on his feet.  Schaub is an all around solid fighter, who has top-notch boxing and solid wrestling.  The area both fighters need to work on is their head movement and ability to avoid damaging shots.  Schaub has looked susceptible to being knockout in his UFC career and that may come back to be the deciding factor in the fight.  But with both fighters coming off tough losses expect them to leave it all in the ring to try to get back to their winning ways.  Browne was dominated by current interum champion Fabricio Werdum in his last fight and Browne lost to Andre Arlovski, in one of the worst fights of the year, by decision.  Browne has the clear advantage heading into this fight and I expect him to show why when the dust settles.  I see Browne winning this fight by knockout in the third round.

This seasons TUF coaches look to face off after one of the most cordial Ultimate Fighter seasons ever for the 4th fight and co-main event on the main card.  Pettis looks to retain belt against the former longtime Strikeforce champion Melendez.  The light weight division is stacked and these two stars look to separate themselves in what should be one of the most exciting fights of the year.  Pettis is an athletic marvel, just Google his knockout of Benson Henderson and see for yourself.  He will switch his stances constantly and look to set up his powerful kicks, and is not a fighter that will win a fight by overwhelming his opponent but prefers smart calculated strikes.  Look for Pettis to use his jab to open up head kicks and to keep distance between him and Gilbert.  Melendez is the opposite type of fighter.  While Pettis picks and chooses his strikes Gilbert throws to knockout his opponent with every swing.  Gilbert is at his best though when he gets inside his opponents range where he can throw strong shots and work his excellent clinch game.  Both fighters have decent ground game but while Melendez looks for the ground and pound Pettis uses his quickness to set up submissions from out of nowhere.  Look for Pettis to use his quickness and reach to keep Melendez at a distance which exactly what he wants.  I see Pettis easily winning this by decision.

The main event on the card is a rematch of what many call the fight of the year.  The first battle between these two stars was a back a forth fight with each fighter landing hard punches that would knockout most other fighters.  Both fighters posses true one punch knockout power and this fight could be over as quick as it starts.  Hendricks has quickly evolved into one of the best strikers in the entire UFC and has improved himself after every fight coming back better. When he throws a punch he throws it with his entire body instead of just throwing shots.  This leads to more powers and less energy being used.  He also added kicking to his repertoire in his first fight against Lawler which turned out to be a deciding factor in Johny retaining his belt.  Lawler has evolved himself into a true striking fighter.  He now uses crisp jabs and a steady onslaught of hooks to set up his knockout shots.  He has excellent head movement which allows him to slide from side to side setting up punches.  And his counter punches are some of the best in the business.  Lawler has great leg kicks but didn’t throw many in the first fight.  Expect to see that change as he tries to keep Hendricks at a distance to maximize his reach advantage.  The curve ball in this fight is Johnys wrestling ability.  If he feels like Lawler is getting the better of the stand up match then Hendricks can use 4 time All-American wrestling skills to bring the fight to ground where Lawler has struggled in the past.  I see Hendricks using that wrestling early to take some power out of Lawlers arms and finishing with a knockout in the fourth round.  Picks aside though this fight will be a brawl from start to finish.