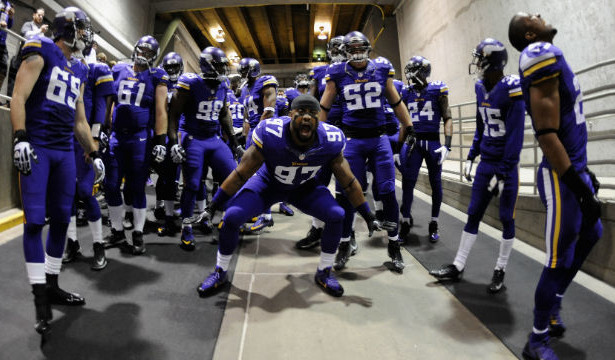 The Minnesota Vikings broke camp in Mankato on August 13th and already have one game under their belts after last week’s win over Pittsburgh Steelers. The Vikes had their first home game as they hosted the Tampa Bay Buccaneers on Saturday night.

There is not a better feeling as a fan to get to the University of Minnesota Campus early and walk the area seeing hundreds of seemingly never ending fans dressed in their Vikings gear.

I know we usually eat at Punch Pizza about 2 blocks from the stadium and so do many others. It is a restaurant of purple. Yes, the food is delicious but the atmosphere is what I love.

The weather I was not sure if it would be a factor as game time temp was 88 degrees but the diehard fans still showed up. We sit in the upper deck and to be honest it was warm but we were the beneficiaries of a nice breeze that kept it from being too hot.

The fans were really fun to watch as with a new season and new hopes there were a ton of smiles entering the gates and people already in their seats as well.

The Gjlarhorn was blown to start the game by Minnesota’s own Phil Housely. The man who played high school hockey in South St. Paul, played years of NH and now is on a coaching staff in the NHL. What great way to start the season seeing Phil down on the field.

I left the 2014 season feeling sky high about Teddy Bridgewater’s progress and could not wait until this season.

Teddy has come out blazing in the first 2 games and yes I know no deep balls connected yet but his short passes are right on. His ability to lead guys on crossing pattern is incredible to watch.

Yes, I know everybody by now knows Phil Loadholt is out for the season. I could not help but look down on the field on the sideline bench and see the big man is frustration. I just knew the way he was acting it was more than a sprain.

The test now comes from TJ Clemmings, 2015 draft choice who I believe will slide up and start next to Mike Harris. The Offensive Line coach, Jeff Davidson, who I believe is one of the best in the business will have Clemmings ready to roll.

Stefon Diggs after 2 weeks and yes it is only preseason but I still throw out this guys has a chance to show that he was the steal of the draft. This man was truly blessed with blazing speed.

The players that really stood out to me on this winning Saturday night were Adam Thielen who just continues to impress with his speed, hustle and ability to catch the ball. I love the play of safety, Antone Exum Jr who had an interception and his return was even awesome.

I next name Eric Kendricks as well as I sit in the upper deck and can watch the field develop watching Kendricks move to the ball in unbelievable.

The group of linebackers is my current favorite group to watch perform. These guys are young and hungry. I look at Gerald Hodges, Brandon Watts, Audie Cole to name a few and who are you going to cut? These guys are animals.

The beginning of the game on Tampa’s first drive was a little disappointing watching Buccaneers’ running back, Doug Martin be elusive and hard to tackle.

You know though the next series and more the Vikings made some adjustments and did a much better job.

The play of Jameis Winston was extremely rough for many reasons with the first coming because of the hustle of the Vikings defensive line. They never made him feel comfortable. His throws were downright ugly and high.

Winston’s center did not do him any favors either with bad snaps. It just seemed chaotic all night for Winston.

Yes, it was it his first game ever and maybe time will help but Saturday night definitely was not a confidence builder.

The score was 26-16 but I do not believe this was a indicator of just how dominant the Vikings were.

Mike Zimmer is now 6-0 in preseason games but what I like even better is the smoothness of the first string offense and defense.

The exciting thing out this equation is my mind Kyle Rudolph’s big body presence along with Peterson running the ball I am only left to imagine just how this year might be even without Loadholt.