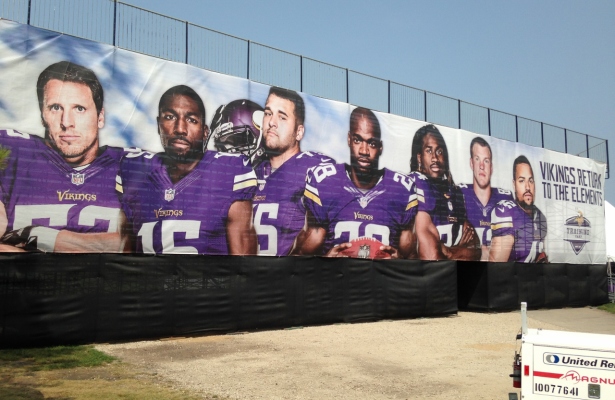 The Minnesota Vikings along with the other 31 teams are in the offseason but in this league there is no real off season as news continues to flow.

Minnesota made a surprising pick up on Wednesday when the team announced they signed former Packer tight end, Brandon Bostick. Yes, the same man who will be always known to Packers fans as the player who cost them a trip to the Super Bowl when he let the onside kick go through his hands. Bostick is 6’3” and weighs in at 250 pounds. He played in 24 games for Green Bay with 9 catches for 123 yards and 2 touchdowns. He now is the 5th tight end on the Vikes roster with: Kyle Rudolph, Rhett Ellison, Chase Ford and Ryan Otten.  My hope is this move will come back to haunt the Packers

MY HOME TOWN INVOLVED WITH THE NEW STADIUM

Owatonna, Minnesota is home to Viracon, the company that is producing the glass. Yes, Owatonna is where I have lived the last 26 years as well.

Viracon was awarded the contract in January of 2014. They will be producing 190, 000 square feet of the exterior glass. This breaks downs to about 6500 square pieces of glass. The company is currently shipping 150-200 pieces each week and that will go on through December.

Each piece of glass is individually cut ns fabricated for the customer. There is nothing in stock which makes this company even neater to read and learn about.

VIKINGS LOGO IS IN CHAMPIONSHIP

There is a twitter you can follow, @BracketBattles. They have been running a fan vote for best logo. Minnesota Vikings are currently facing the Philadelphia Eagles in the championship with the Vikings in the lead by a large amount with Sunday the contest ending. Yes NHL, NBA, MLB are all involved. Minnesota beat the Los Angeles Dodgers in the first round, and then the New Orleans Pelicans and most recently defeated the Pittsburgh Steelers and now in the championship vs the Philadelphia Eagles. GO Vikings

HALL OF FAME WEEKEND BIG FOR MORE THAN ONE REASON

Mick Tingelhoff long overdue wait has paid off as Mick will be enshrined in Canton, Ohio on Saturday August 8th. The Minnesota Vikings then take on the Pittsburgh Steelers in the Hall of Fame game on Sunday August 9th at 7:00pm

The Adrian Peterson saga is one that just does not end either way. The draft is just around the corner. The speculation talk gets old and never seems to go away.

I am not a guy who does mock drafts although I love to read what people think. I say this after watching the Saturday combine all day Saturday. I say this if Peterson does not come back I will say the Vikings will take with the number 11 pick a running back. I would love to see Melvin Gordon (Wisconsin) or Todd Gurley (Georgia) in purple. I know Gurley did not participate but with the amount of college football I do watch gives me the hope that Gurley would be the future.

I truly enjoyed watching the receivers work out Saturday. I know at 11 I don’t believe 2 of the top receivers would be there. If you saw Kevin White’s workout you would love to see him at the next level. The man is a freak with size, speed and strength. The other would be former Alabama standout, Amari Cooper.

The draft is just a few weeks away and trades could be made to move up by teams. I turned the TV Saturday afternoon just shaking my head at White’s performance. I believe whoever gets him will be in for a treat.

Football is more than the game it is everything from combine to the draft to free agency to mini camps and then training camp. Football is 365 a year and I love it.