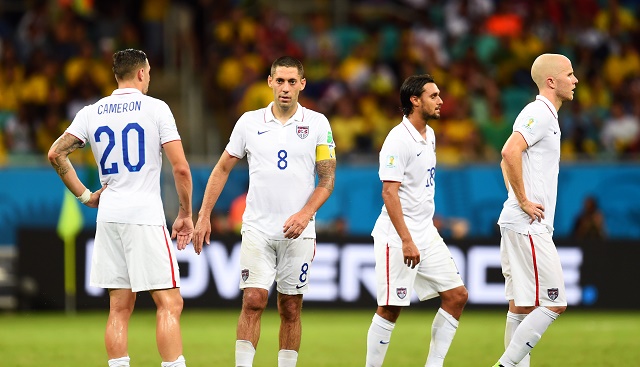 The United States of America is the Land of the Free and the Home of the Brave. We have a variety of different sports and different people like different teams. Once every four years we all come together to cheer on one team as they face off against other countries looking to show off their heart and pride that all Americans live with.

The game was all tied at one when Jurgen Klinsmann subbed in John Brooks, the 21 year old from Berlin did not expect to play at all in the World Cup, and he was in the game at the most important moment. The crowd was chanting ‘I believe that we will win.’ On a corner kick, Brooks headed in what was the game winner and the most important goal of his life. That trust and togetherness that Klinsmann preaches to his team was a huge reason that the United States won their opener against Ghana.

USA lost 1-0 to Germany but all results went in their favor and they made it out of the group of death. Nobody believed in them but they believed and that was all that mattered to them. The heart of the United States team was impeccable and that heart was the reason that the United States advanced to the round of 16 in consecutive world cups for the first time in their history.

The United States opponent was Belgium, it was simple win or go home. The United States was dominated all game but the game was 0-0 at the end of regulation thanks to Tim Howard who finished the game with a legendary 16 saves, those 16 saves were the most in a World Cup game by any goalie in the last 50 years. Would it be enough? Belgium scored 2 goals in extra time, the game appeared all but over, most teams would quit, but not this United States team.

Most teams would’ve rolled over, and called it quits after giving up 2 goals in extra time but this team kept fighting, and never quit. That fight should make all Americans proud of their team, the United States will be a force to be reckoned with in future World Cups. The future is bright and if the United States plays with this much heart and pride, there’s reason to believe that we will win.