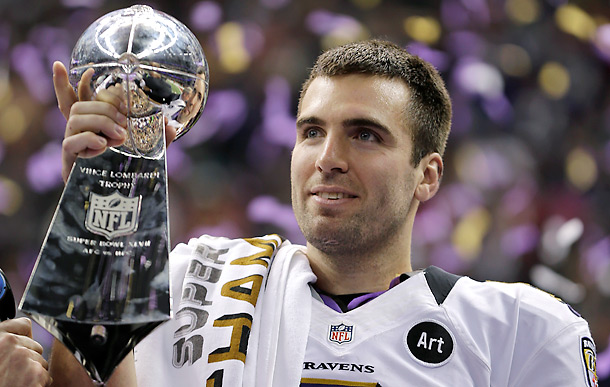 Joe Flacco is your average NFL quarterback.  Sure, a completion percentage of 62.0, a 27-12 touchdown to interception ratio and 3,986 passing yards puts him 12th in the NFL. Stats some QB’s dream of, but Joe Flacco is just, almost, kinda average. He has weapons at his disposal that keeps defensive coordinators up at night, and a very solid defense to protect any lead he can provide. The Ravens finished 10-6 this season and jumped in the backdoor to the playoffs. Waiting for them was a game with division rival Pittsburgh, on the road. Flacco threw two second half touchdowns to secure a 30-17 win in the game, going 18-29 for 259 yards in the process. Again, not great numbers, but as with playoff games before, the switch was in the “on” position, that same switch that he’s turned on in years past. He goes from “average” Joe, to a stone cold killing machine. There is an air of steadiness about him that can’t be penetrated. Since 2010, he has an overall record of 52-28. The Ravens are 7-2 in playoff games he’s started since 2010. He has a Super Bowl ring to go with that plus a Super Bowl MVP trophy. He has 20 touchdowns to only 3 interceptions during that run, along with a knack to control the offense and keep the opposing offense on the bench.

After Saturday’s victory in Pittsburgh, he has a streak 166 completions without an interception. That’s the fourth longest streak in NFL history. He is just the third quarterback  in league history to have at least 5 consecutive postseason games with a QBR of more than 100. All this from the same Joe Flacco that went to McDonalds after signing his huge contract in 2013. $52 million in guaranteed money, and he goes for a 10 piece nuggets, fries and an unsweetened tea. Typically average, but leaves you wondering if he drinks that tea a little sweeter in the postseason.

Stats and info courtesy of ESPN and Rotoworld..