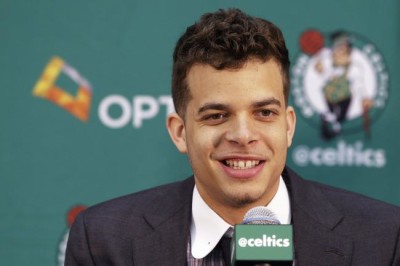 I know he has only played two games in the NBA Summer League, but is R.J. Hunter flashing signs that he is a bust? Maybe.

Through 37 minutes of play, he has yet to score a single point. In those 37 minutes he has 0 points, 5 rebounds, and 1 assist. The Celtics drafted R.J. Hunter because of his scoring ability, not because of his rebounding skills or defense. If he can’t score against the best of the best college players and NBA role players, how exactly is he to succeed in the NBA?

Can he carry over his scoring success to the NBA? Maybe, but probably not.

Many analysts projected Hunter to go in the late teens to mid twenties in the draft. I wasn’t a fan of him since he was coming out of Georgia State, a college that just started to compete at the Division I level recently. He hit that big shot that sent the Baylor Bears packing in the NCAA tournament, and I believe that’s the only reason why he was drafted in the first round. He was selected 28th overall by the Boston Celtics who already have a backcourt juiced with youth talent. I don’t see Hunter making an impact this year. He might not even suit up for the Celtics at all this season. Perhaps he will play in the D-League this year.

It may be too early to tell, but R.J. Hunter might be in fact a bust,