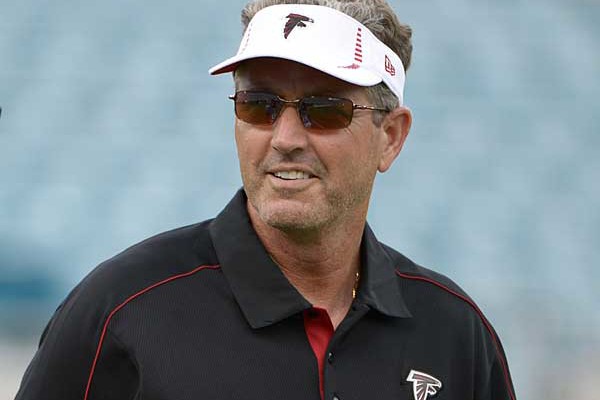 The Tampa Bay Buccaneers who had the distinction of being the worst team in the NFL this season have hired Dirk Koetter to be their new offensive coordinator. His first step will be helping coach Lovie Smith decide whether Marcus Mariota or Jameis Winston will be the new face of the struggling franchise. The Bucs who by finishing last hold the number one pick are likely to take one of the two quarterbacks to replace Josh McCown who was less than adequate this year.

Koetter had spent the last three seasons as offensive coordinator for the Falcons. He previously held the same position with the Jaguars for five seasons. He replaces Jeff Tedford who had heart surgery before the season and was never able to fill the position.  The Falcons finished eighth in total offense this year while Tampa finished thirteenth. The Bucs have some offensive weapons in running back Doug Martin and rookie of the year candidate receiver Mike Evans but with a bad offensive line and shaky quarterbacks the offense never got on track.

The biggest challenge facing Koetter will be trying to build an up tempo offense like he ran in Atlanta with a rookie signal caller. Both Mariota and Winston are Heisman trophy winners and accomplished college quarterbacks but it remains to be seen if they will be ready for the rigors of heading a pro team. The Bucs could choose to go with incumbent McCown or give Mike Glennon another shot giving whoever they draft a chance to sit and learn. Whichever direction the Bucs decide to go the hope for Bucs fans is that Koetter can revitalize an offense that has been without direction for a few years now and invigorates a team that has been terrible for too long now. After hiring Lovie Smith as head coach last year this team was expected to perform better, now with the first pick in the draft their new offensive coordinator should have a new toy to play with and the fans will be able to look forward to next season with renewed hope.