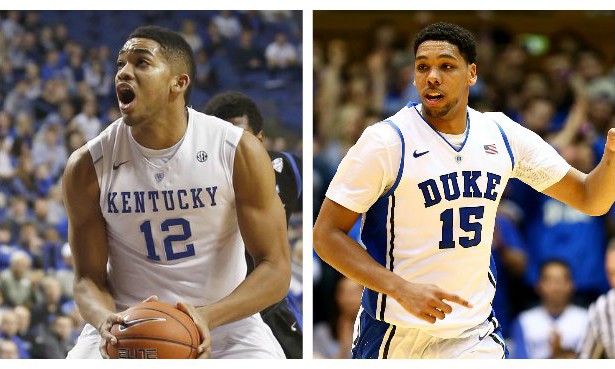 The NBA draft lottery has now come and gone with the lowly Minnesota Timberwolves snatching the top pick. Fortunes are definitely looking up if you your a Wolves fan. The Wolves still have Ricky Rubio and Nikola Pekovic in the stables and after drafting Zach Lavine they looked to move on from Kevin Love and pulled off a steal of a trade in which they acquired stud prospect Andrew Wiggins, the first pick of the 2014 NBA Draft, 2013 number one overall pick Anthony Bennett and a protected first round pick. Fast forward a year after Wiggins takes home ROY and Lavine the Sprite Slam Dunk Champion, Minnesota now has a huge dilemma in selecting the next piece to add to their turn around.

It’s not everyday when you have the opportunity to pick between two big men that can have a quick impact on the court and as much talent as Kentucky’s Karl Anthony Towns and Dukes Jahlil Okafor. Consensus has Towns going first as he has huge upside, a legit 7-footer showed some range with a jumper, rebounds at a high clip, good athleticism, and very, very good on defense. He showed he could be a elite defender and the potential to develop a impressive offensive game. The upside on Towns cannot be ignored, there is no guarantee that he reaches his fullest potential but the imagination can run wild as you watch Towns play. Towns has been compared to the likes of Andrew Bogut who was a former #1 pick of the Milwaukee Bucks.

On the other hand you have Jahlil Okafor who is an absolute beast on the low block. He has incredible foot work for his youth and shows great patience. He gives an array of fakes and pumps to get position and score the ball. He also showed very nice timing and awareness passing the ball as well as on D. He was thought to be the prize of the draft all year long until Towns showed up big in the NCAA tournament. Okafor doesn’t have much of a mid-range game but has the ability to dominate in the paint. He is the safest pick as he rebounds, defends, scores, basically does everything you could want your center to do for your team and his game should transfer into NBA with minimal growing pains far less than with a young guard. Oh and his huge 7’5 wingspan is extremely attractive to GM’s. Jahlil Okafor has been compared to Al Jefferson but with a better defensive game.

Honestly you can’t fault the Wolves no matter the pick and second guessing won’t help either, make the pick and be happy. They will need to look very closely at both between film, workouts, as well as interviews to decide which will be the best fit for their young team. The Los Angeles Lakers who sit and wait with the #2 pick will be happy to take whichever big man Minny leaves on the board as they too look to build their front court and turn their fortunes around. These 27 days until the draft will be filled with speculation and wonder with many rumors as well with the rest of the draft, although your top 2 teams picking should remain the Minnesota Timberwolves and the LA Lakers.

I’ll leave you with this prediction. Karl Anthony Towns will go first overall to the Wolves due to his tremendous upside and the LA Lakers will happily take Jahlil Okafor with the 2nd pick in the 2015 NBA Draft.