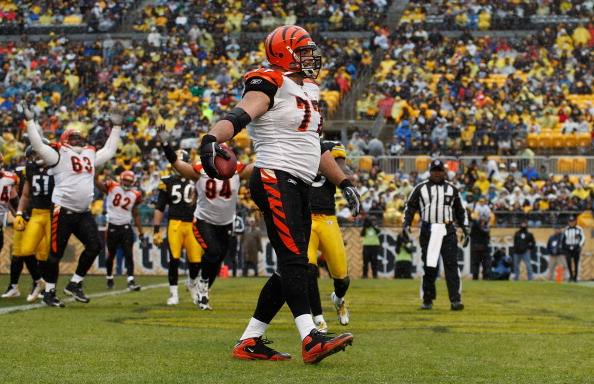 Greetings Bengals fans! Here working on part two of my three part series on the Bengals areas of need before free agency and the 2015 draft begin. I’ll be breaking down the Tackles, Guards, and Centers individually and commenting whether I think the team needs to add a player or two in that area. Let’s get started.

Profootballfocus ranked the Bengals Offensive Line as 13th this past season. A significant drop from being ranked 2nd last season. Left Tackle Andrew Whitworth ranks at the top for his position for the second year in a row. The guy is unreal in how versatile he is going from being an elite guard to an elite tackle protecting Dalton’s blindside. Getting Andre Smith back at the Right Tackle spot should do a lot of good next year. When he went down in Week 9 the Bengals really struggled in pass protection until signing veteran Tackle Eric Winston who played very well. Given he only started four games for the Bengals though the jury is out, but he was a good signing. It is my opinion that the Bengals could really use one more tackle as an insurance policy in case Smith isn’t the same after his injury or is hurt again next season and Winston proves over a larger amount of games he isn’t the answer. But it doesn’t have to be a high pick since the Bengals have so many talented players at the position already.

Clint Boling a 4th round pick out of Georgia in 2011 struggled a bit in Pass Protection last year but came on towards the end of the season. However he struggled quite a bit in the running game being a huge part of the low ranking for the team overall in that area. The Bengals other Guard Kevin Zeitling had a very strong season in terms of pass protection and was average in the running game. Meaning for me Guard is a big need for the Bengals. Boling is going into his fifth season and with him struggling  I can’t see the team being excited about giving him a new contract next season. The Bengals wanna run the football to take pressure off of Dalton and right now that’s a problem. They shouldn’t reach for a position of need in the first round however if the value isn’t there. The Raiders got a cornerstone in Gabe Jackson in the third round. It’s all about finding that value.

Rookie Center Russel Bodine stepped in right away as the starter which is impressive in itself. But he too struggled all season in the running game. This is especially concerning considering this was considered an area of strength for him coming out of college and while he did show flashes at times. It’s an area that must improve for Hugh Jackson’s run heavy offense to work effectively. It wouldn’t be ridiculous to say if the run blocking doesn’t vastly improve next year the Bengals entire championship window could be shut sooner than we’d all like.  I think picking up a Veteran Center if Bodine struggles in Year 2 would be the best way to fix the problem, another young player probably isn’t the answer.

I know it’s a little short and way late guys and I apologize. I’ll be bringing you part 3 which is pretty large itself covering the entire Defense in the next part. I also have my first mock draft coming up soon and the top 10 storylines for the AFC going into next season. So keep an eye out for those. Take it easy until then.

HTML Snippets Powered By : when does dog the bounty hunter come back on uk tv
Menu Title
%d bloggers like this:
NFL Teams