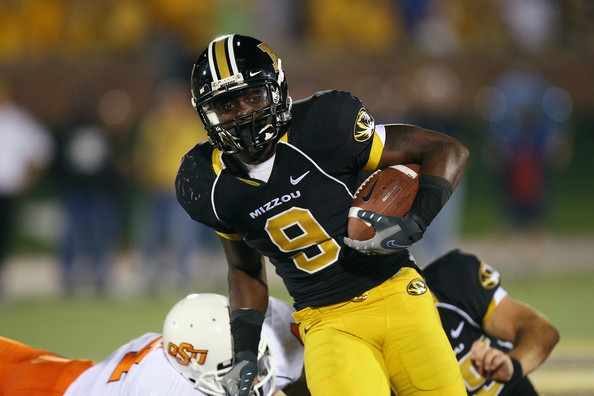 He’s in the top five percent of the players in the NFL, according to his peers.

To think his national recognition began wearing a golden number nine on a black jersey, playing in Columbia, Missouri.

In case you missed it, the NFL Network release the next installment of their Top 100 Players of 2015 list. The list is made by every player filling out a ballot with the players they believe are the best in the NFL entering the season, and players ranked 70-61 were revealed Wednesday, May 27. Former Missouri Tiger and current Kansas City Chiefs Wide Receiver Jeremy Maclin, a two time consensus All-American with the Tigers, came in ranked as the 61st best player in the National Football League.

It was a long time coming for Maclin, the 19th pick of the 2009 NFL Draft by the Philadelphia Eagles, never “earned” the bust label in Philadelphia but through his first five seasons, his stats never complimented his true talent. Through his first four full seasons (An injury sidelined Maclin for all of 2013), Maclin had 3,223 receiving yards (never eclipsing 1,000 yards) off of only 244 receptions (an average of 61 per year). Maclin’s receiving touchdown totals were even more disappointing. Despite having 10 touchdowns in 2010, Maclin averaged a mild 6.5 touchdowns per season. Missouri fans were well aware this wasn’t Maclin. Those who witnessed Maclin total 2,776 all purpose yards in 2007 (An NCAA record by a freshman) only to follow those totals up with 2,833 yards in 2008, with 16 touchdowns in 2007 and 17 in 2008 respectively, knew that the real Maclin had not made his presence known in the NFL yet.

Then in 2014, after the Eagles released Desean Jackson, whose shadow Maclin called home throughout his career, and signed by their division rival, Maclin was given the opportunity to flourish.

To say Maclin flourished is an understatement. His 85 receptions were a career high, 15 receptions more than his previous career high of 70 in 2010. Maclin also totaled 1,318 receiving yards, 354 yards more than his previous career high of 964 also in 2010, and he matched his career high in touchdowns with 10, a number he also reached in 2010. Rightfully so, Maclin was honored with his first career Pro Bowl. Joining Justin Smith, Aldon Smith, Sheldon Richardson, and William Moore on the list of former Missouri players to make the Pro Bowl since 2010.

Maclin didn’t re-sign with the Eagles, and now returned to his home state of Missouri to play for the Chiefs where he hopes to become the first Chiefs receiver since 2013 to catch a touchdown.

It may seem like a small feat, being named 61 on a list of the 100 best players in the NFL, but it’s heart warming to see a talented player not only show off his skills to the whole league, and not only to have his stats fairly represent his ability and skill as a pass catcher in the NFL. One can bet, this was no small feat for Jeremy Maclin.