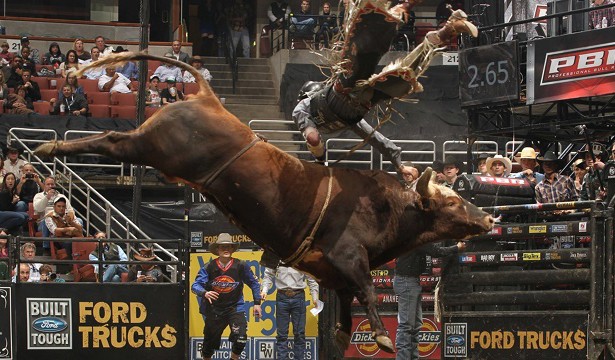 -In the world of the cowboys we saw champions crowned this past weekend in the PBR down in Las Vegas Nevada. 5 grueling rounds of the best bull riders and bulls in the world all under one roof. The action was intense, history made, and dreams came true and dreams were shattered.

In a sport that no one truly knows who the stars are, whether it be the bulls or the cowboys, we saw both crown a new three-time world champion, a feat only accomplished by one of each in the 20 year history of the PBR. Previously accomplished by Adriano Moraes and Little Yellow Jacket.

26-year-old Brazilian Silavano Alves came from behind to overcome fellow Brazilian Joao Ricardo Vieira by covering all 6 of his bulls in the world finals including a short round ride aboard former bull of the year Asteroid for 87.25 to clinch the title. When asked about how he felt after winning his third title Alves said, “It really means a lot to me this year,because at the beginning of the year, I wasn’t riding that great. thankfully I was able to stay healthy and come from behind, it means a lot to me to win this championship again.” Alves was also asked about how many titles he envisions himself winning, he chuckled and all he could say is, “I don’t know, no , no I don’t know. I just want to ride, as long as I’m riding I’m happy.” At such a young age Alves has the potential to keep adding to his championship total as long he stays healthy, he has won it all 3 of the last 4 years.

On the other side the Julio Moreno bucking bull Bushwacker also claimed his third world title in 4 years and ended his career on top retiring after the short go. Bushwacker did his own little come from behind win as he didn’t get off to his typical huge start early in the finals and was scored under other Bull of the Year contenders. In round two he bucked off Brady Simms in 3.9 seconds for a bull score of 45. ( The bull score accounts for 50% of the total score). Than came back strong in the short go bucking off former world champion Mike Lee 2.13 seconds slamming him to the arena floor giving him a concussion and a taking a bull score of 46.5 . Bushwacker will go down as arguably the greatest bull to ever live. He went out on top bucking off 20 straight riders and the biggest celebrity of the PBR. He is the leader in the revolution of the bucking bull business, he was big strong a and flat out genius, He out smarted as well as overpowered and out maneuvered almost every cowboy to climb down on his back and nod their head. Bushwacker will now live out his days eating and making babies;)