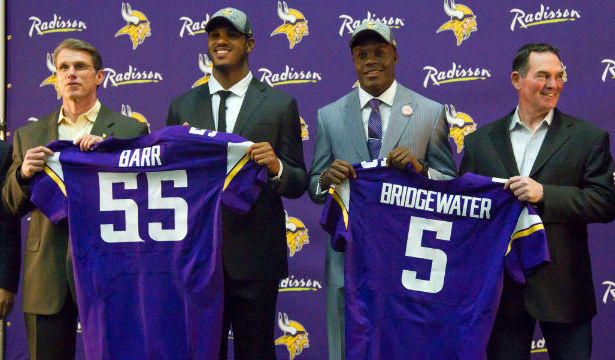 The life of a Minnesota sports fan can be tough and challenging but also we are seeing rewards with youngsters and veterans alike helping give Minnesotans hope. Yes, the Vikings have been to 4 Super Bowls and lost all 4 while the Twins have won 2 World Championships in my lifetime in 1987 and 1991. The Wild and Timberwolves have never been to their respective finals yet the teams are showing promise at times and thus the future I believe is exciting.

The Minnesota Wild last season made it to the second round of the playoffs and lost to the Chicago Black Hawks in a very good series that left hope. It was after the Black Hawks players were noticing a better Wild team. The offseason comes and with that we see the team sign a big goal scorer in Thomas Vanek.

The season starts with 2 shutouts in a row over Colorado and the hope for a good year is off to a great start. The struggle for Minnesota fans begins in mid-December and goes through mid-January as the team lost 12 of 14 games and the thought of the playoffs was suddenly becoming an oh no.

The Wild made a huge acquisition when they acquired goaltender, Devan Dubnyk who in his first start got a 7-0 shutout on January 15th over the Buffalo Sabres. The next day Zach Parise’s dad’s funeral so another question possibly how would Zach come back from this devastating loss in his father.

My opinion on Zach is the man is the best hustler in the NHL and worth every single penny he is paid, Zach has played unbelievable and his teammates are coming through as well. The combo of Dubnyk and the Parise story has been only 2 of the postives.

The team is playing great team defense, have now killed off 25 shorthanded situations in a row and guys are stepping up and scoring. It seems like every night someone different scores. Saturday night in the 6-3 win over Carolina saw Thomas Vanek have his first multiple goal scoring night and saw defensemen, Nate Prosser get a goal as well. Captain Mikko Koivu is piling up the assists on goals.

The smell of the playoffs is getting closer and when the Wild keep playing with this confidence and the goaltending by Dubnyk we will be looking at a fun April and hopefully into June. GO WILD

The Minnesota Timberwolves have won only 11 games all year which is only 1 better than the New York Knicks. The team has dealt with so much injury problems the first half of the year.

The team is young and I belief the most athletic team I have seen in many years, Ricky Rubio is back from injury which is huge for this offense.

The team has rookie of the year candidate, Andrew Wiggins playing like a number one pick overall should play like. The team has lost Kevin Garnett and most recently Kevin Love so now we as fans wait to see this group of youngsters develop.

I believe there is so much potential. I am not saying NBA finals for a while but I believe the team is building the right way.

The NBA All Star weekend is currently going on in New York City, Friday night was the Future’s game with Andrew Wiggins, Shabbaz Muhammad, Zach Lavine and Gorgui Dieng all participating and did they put a show on. Wiggins was named game’s MVP.

Saturday night was the Dunk Contest with 19 year old rookie, Zach Lavine putting on a clinic with a score of 100 in the first round and then winning the championship with his high flying, athletic dunks bringing the crowd and NBA players to their feet.

This team has the sky for a limit with the youth and hopefully health we will see a more competitive in the 2nd half of the season. An alley oop from Rubio to Wiggins is just one of the future things to look forward to.

I believe Timberwolves fans that have been waiting along time are seeing the start of success in little bits but you have to start out little to get to the bigger picture.

The Minnesota Twins are coming off 4 seasons in a row of 90 plus losses and the home attendance has been sinking.

The team has brought back fan favorite, Torii Hunter and spent money on pitching. The team has potential for some power this season with Oswaldo Arica, Kenny Vargas, Brian Dozier and Trevor Plouffe to name a few.

Joe Mauer needs to bat at least .300 and stay healthy as one of the leaders of the team. The team found a catcher last season in Kurt Suzuki.

The Twins have a new manager in Paul Molitor and a new pitching coach along with a couple new faces on the staff.

The signing last year of Ricky Nolasco and now this offseason signed Ervin Santana. Phil Hughes comes back after a great 2014 season. The staff is looking at least on paper better and then the team has a consistent closer in Glen Perkins.

The Twins are in a tough division with Kansas City looking strong last season and now this offseason the White Sox made moves. The Tigers are always at the top and then we have the Indians.

I am not proclaiming World Series yet but I do say in confidence that this team will be more competitive and bring excitement back to Target Field. I feel very good in saying this team will be close to .500 if not better. This will not be 90 loss season.

The Minnesota Vikings finished 7-9 last season in Mike Zimmer’s first year coaching. The team loses Adrian Peterson for the season along with other key starters and yet still gets 7 wins.

Vikings fans saw the future in Teddy Bridgewater on offense and linebacker, Anthony Barr on defense.

The team has Harrison Smith and Xavier Rhodes emerging as well. Zimmer’s is a no non sense guy with a huge knowledge of defense as an asset.

The 2015 draft will prove once again worthy of watching as the team picks 11th.  Is it going to be offense or defense?

All I can say is the bottom of the NFC North will not be seeing the Vikings there. The team is building with youth and speed and soon the Packers, Lions and Bears will not think easy win anymore. The Purple is for real and Mike Zimmer is there to get the job done.

2015 Season is going to be exciting. GO VIKINGS

I get teased a lot about being a Minnesota fans because of all the disappointments but with each team I just went through I believe these teams will show the country that Minnesota is no joke.