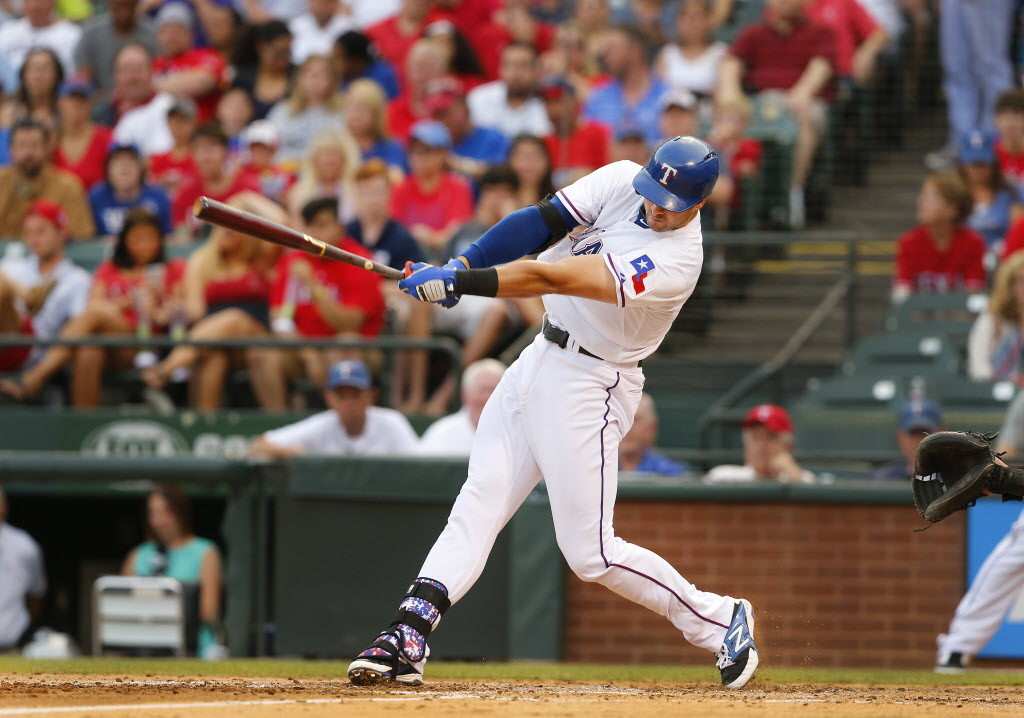 The Rangers just wrapped up a three game series against the Tampa Bay Rays. The series, by no means, was a direct battle for a Wild Card spot, however it was most definitely a battle for a chance to potentially battle for a shot at making the playoffs. Going into the series, Texas was sitting just below .500, at 56-57. The Rays were coming into Arlington on a four game win streak, and sitting at 58-56. Now the teams’ roles have been flipped, as the Rangers pulled off the sweep, winning all three games versus the Rays. Here’s the highlights:

In game 1, Texas outfielder Delino DeShields hits his first Major League homer, as the Rangers were trailing. His two run slammer, off reliever Steve Geltz, pushed the game to the Rangers favor, after they only managed two hits prior. Josh Hamilton hit a home run in his first at bat of the game, which was also his first at bat after missing three games due to injury. The eighth featured a Beltre single, a Moreland single, a Hamilton sac-fly, as well as an Andrus single. Texas secures the victory 5-3.

Game two was the highest scoring game of the series, featuring double digit hits by both teams. The Rangers were escorted to their 12-4 victory by home runs from Chris Giminez, Adrian Beltre, and Shin-Soo Choo. Giminez took the lead away from the Rays with his two run shit in the second. Even after Colby Lewis allowed Tampa Bay to get on the board in the fifth, Texas showed up the next inning with seven runs. Beltre led the sixth with a shot to the yard that scored three. The Rays attempted a rally, but were shutdown quickly with answers from Shin-Soo “The Train” Choo. (A well deserved name since his fantastic numbers after the All-Star break have proven him to be unstoppable, and well, you can’t stop a train!) After such a poor showing from the Rays’ Chris Archer,  Archer who’s name is often brought up in Cy Young talks, Tampa is scurrying to keep him from falling into the slump. Texas lands the series win, and move to game three with a sweep in mind.

The final game of the series had fans from both sides on the edge of their seats. Both teams took punches, and dished them out, throughout the close matchup. Mike Napoli had his first hit since being re-acquired by the Rangers. Strausborger put up his first homer for the year, as well as having a key single in the second with two outs. He kept the Rangers alive, allowing DeShields to get the game-tying  RBI. Texas wins 5-3, secures the sweep, and earns back a winning record.

The battle for the playoffs continue as Texas faces Seattle in a three game series, starting tomorrow. As it stands, Texas is one game back from second and four from first in the AL West. The Rangers are close to Wild Card contention, sitting just one game out of Wild Card leadership.

legend of the superstition mountains history