Wild showing no I in team 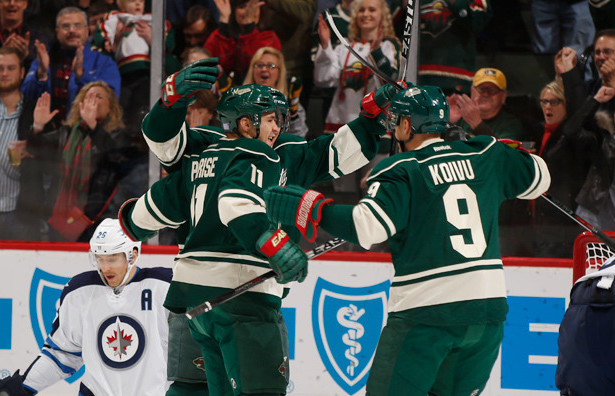 The Minnesota Wild are playing so well and now even contending for a playoff spot with each and every game becoming more and more important. The team wins at home and now in the recent month or so going on the road and taking back to Minnesota a win and more important 2 points.

I guess when I think of the Wild I think of the names: Parise, Suter, Koivu, and Vanek to name a few. These guys are playing consistent and contributing yes, but what is making this team even more fascinating is the contribution they are getting from the 3rd and 4th lines.

The goaltending by Devan Dubnyk may just be the story of the NHL season. I thought about naming this article, “Can 1 person make this big of difference?” It is a team sport so I will focus on all.

The goaltending in the previous 14 games before the trade came had given up 58 goals. I found a stat Dubnyk has now started 20 straight and given up a mere 32 goals. The next game on Tuesday Dubnyk should start and if so it would be a team record 21st start.

The Wild have never had a player of the month but with the just completed month of February Dubnyk does have numbers that will be hard to beat. He was 11-2-1 with 1.69 goals against and a .939 save percentage and 3 shutouts.

The Minnesota Wild in January were in 12th place and several points out of the playoffs but now in February out of a possible 28 points the Wild claimed 23 of them to help them back into the top 8 in the West. The team has also in the last 11 road games gone 8-1-2.

One of the biggest differences in the team is the penalty kill and again in the last 2 games the Wild went 9-9 in the kill.

Minnesota has beaten Colorado now 4 straight and a very impressive 12-1 in goals. Minnesota had 3 straight shutouts before finally allowing a goal Saturday night.

This team has the word team figured out and all signs are pointing towards a playoff season coming in April.